Rights group condemns US 'vigilante' treatment of migrants on border

Rights group condemns US 'vigilante' treatment of migrants on border 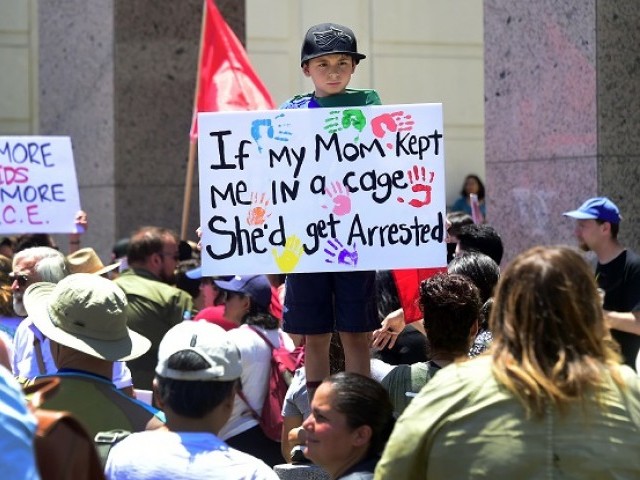 In this file photo taken on June 30, 2018 people hold placards during a 'Families Belong Together' march and rally in Los Angeles, California where a thousands turned out to decry the Trump administration's detention of families policy at the US Mexico border. PHOTO: AFP

The American Civil Liberties Union of New Mexico on Thursday called for state authorities to investigate a small group of armed US citizens who they alleged are illegally detaining migrants entering the United States.

The United Constitutional Patriots, who claim to be mainly military veterans, have been patrolling the US-Mexico border near Sunland Park, New Mexico, since late February in search of illegal border crossers.

They post near daily videos showing members dressed in camouflage and armed with semi-automatic rifles holding groups of migrants, many of them Central American families seeking asylum, until US Border Patrol agents arrive to arrest them.

The small volunteer group says it is helping Border Patrol deal with a surge in undocumented migrants but civil rights organisations like the ACLU say it is a “fascist militia organisation” operating outside the law.

“We urge you to immediately investigate this atrocious and unlawful conduct.”

The offices of Lujan Grisham and Balderas did not respond to requests for comment.

On a March 27 visit to El Paso, Texas, next to Sunland Park, then US Customs and Border Protection (CBP) Commissioner Kevin McAleenan said his agency, which runs US Border Patrol, did not need the help of citizens to police the border.

“We are not asking for civil society groups to provide border security assistance,” said McAleenan, who was recently appointed acting secretary of the US Department of Homeland Security.

US CBP did not respond to a request for further comment. UCP member John Horton did not immediately return calls. Horton has previously told media that UCP members are armed for self defense, as is their right under US law, and aware they cannot detain people entering the United States illegally.

US armed groups have long patrolled the US border, their numbers rising during upticks in migrant apprehensions, such as during the mid 2000s when the Minuteman Project was established.

The UCP says it is responding to a rise in migrant arrests to their highest monthly levels in more than a decade.

The ACLU said the group was a product of the Trump administration’s ‘vile racism’ that “has emboldened white nationalists and fascists to flagrantly violate the law.”

All Notre-Dame paintings to be removed as officials head inside