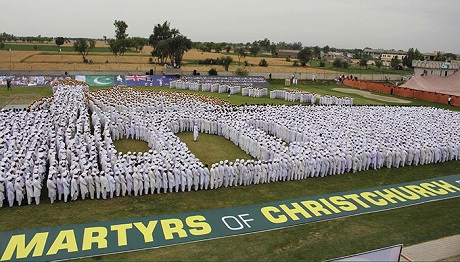 ISLAMABAD: Condemning the global anti-Muslim propaganda, the participants of the ‘Paigham-e-Islam (Message of Islam) Conference’ held on Sunday announced a campaign against extremism, terrorism and sectarianism.

They also lauded the success achieved by the Pakistan Army against terrorism and announced the ‘Message of Peace Award’ for New Zealand Prime Minister Jacinda Ardern.

Speaking on the occasion, President Dr Arif Alvi said both Kashmir and Palestine would win their freedom one day as no community or religion could be suppressed by force.

“My heart beats with Palestine and Kashmir. Pakistan will continue extending its moral and political support to the Kashmiri people,” he added.

Representatives of the Saudi Ministry of Religious Affairs and religious scholars from across the country also attended the conference.

The event started with the recitation of Surah Rahman by the Imam-e-Kaaba.

President Alvi advised religious scholars to spread the message of social revolution from the pulpit that had been the platform for social messaging since the early days of Islam.

“Clerics must guide the people on social issues like cleanliness, water conservation and tree plantation,” he added.

Expressing his grief over the loss of lives in Friday’s suicide attack in Quetta, the president said Pakistan had successfully fought against terrorism and the residues would also be eliminated.

Recalling Pakistan’s generous hosting of 3.5 million Afghan refugees, he said the world must learn compassion and humanity from Islam and Muslims.

“Some western countries are even resisting hosting a few dozen refugees. They are erecting walls to keep them out and let them die at sea,” he noted.

The president said social change could only be accomplished after the introduction of a uniform educational system in the country.

He thanked the Saudi leadership for further strengthening ties with Pakistan.

Alvi added that no force in the world could harm Muslims if Pakistan and Saudi Arabia stood united for a cause.

Earlier, the president gave away shields and souvenirs to the visiting dignitaries.

Religious Affairs Minister Noorul Haq Qadri said clerics were responsible for creating unity among Muslims and sensitising them on the country’s rules and regulations.

He added that the government was committed to protecting madrassas and striving for a uniform educational system to bring the students of the seminaries at par with those studying at other educational institutions.

Allama Tahir Ashrafi said the Pakistan Ulema Council had the distinction of issuing a decree against suicide attacks for the first time in the year 2000.

“It was also the first body to issue an edict against Daesh,” he added.

“The world must end intervention in Islamic countries on the basis of sectarian differences.”

Qureshi to pay two-day visit to Japan on April 21