‘Cool’ rickshaw a refuge for commuters

‘Cool’ rickshaw a refuge for commuters

Muhamm­ad Ameen has instal­led a portab­le air cooler inside his vehicl­e which runs on solar power
By Kashif Zafar
Published: April 14, 2019
Tweet Email 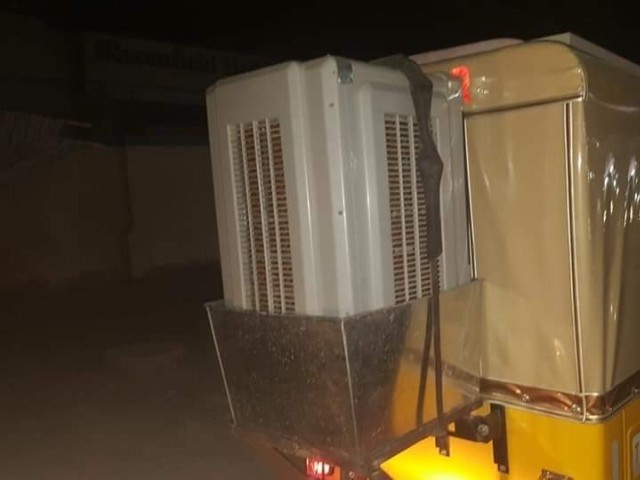 BAHAWALPUR: Summer is fast approaching and with its advent, the temperature has started to rise steadily. Citizens are constantly looking for ways to stay cool in the sweltering heat while going about their daily lives.

Joining the fight against the heat is rickshaw driver Muhammad Ameen, who has installed a portable air cooler inside his vehicle. This one-of-a-kind rickshaw can be spotted on the streets of Bahawalpur, ushering citizens from one destination to another, keeping them cool by harnessing energy from the sun.

“It becomes very difficult to earn a living during the summers. The heat becomes unbearable in Bahawalpur,” he explains. To combat this, I installed an air cooler in my rickshaw to keep my passengers and I both cool during the sweltering heat, he states.

Ever since I came up with the idea, I have started to get more customers, he says. He believes people prefer his rickshaw as it is cheaper when compared to an air-conditioner taxi.

Malik Arif, a resident of Qasim Town, says that he first clocked the upgraded rickshaw when he was on his way home. Curious, he decided to complete his remaining journey in the rickshaw. The tricked out vehicle was nothing less than an air-conditioned taxi and was also cheaper, he says.

Muhammad Aamir, a resident of Muhammadia Colony says that such innovative ideas should be encouraged. More drivers should adopt this unique idea; it is not only benefits the driver’s health but also attracts more customers who are looking for cheap and confortable ways to travel during the summer, he states.