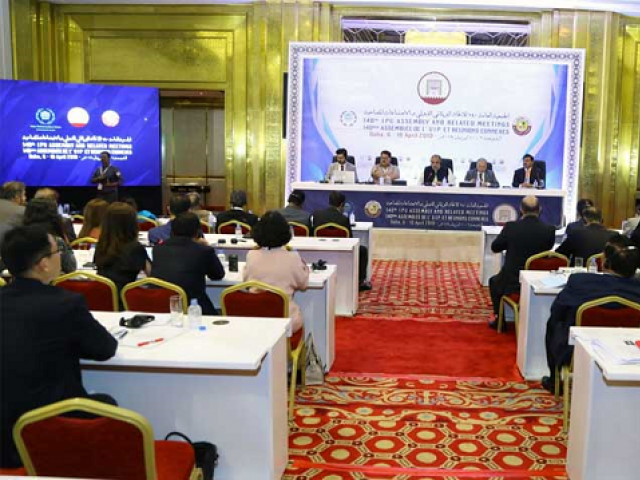 Qaiser presided over a meeting of 35-member Asia-Pacific Group of the Inter Parliamentary Union at Doha in Qatar. PHOTO: RADIO PAKISTAN

National Assembly Speaker Asad Qaiser has called for forging unity among the ranks of Asian nations in order to turn the current era into a truly ‘Asian century’, Radio Pakistan reported on Sunday.

Qaiser made the remarks while presiding over a meeting of 35-member Asia-Pacific Group of the Inter-Parliamentary Union in Doha, Qatar.

The speaker of the lower house of parliament also stressed on the need for adopting a unified approach by Asian countries to tackle their issues.

He also offered his condolences to the people and parliament of New Zealand over the act of terrorism carried out at the Christchurch two mosques which claimed 50 lives.

Speaker Asad Qaiser chairing the 35 Member Asia Pacific Group of the Inter Parliamentary Union in Qatar. Pakistan has been elected as the chair of this important group for the first time. pic.twitter.com/ShXxbLS6X1

Qaiser emphasized on invoking the dicta of parliamentary diplomacy, ensuring regular and frequent contacts among the Asian legislators in order to develop better understanding on issues of terrorism, poverty, xenophobia and clash of civilisations which badly hampering the harmonious development across continents, especially in Asia.

As chair of the group, Qaiser offered Pakistan’s complete support to any such effort.

The meeting of the group, which was held prior to the inaugural ceremony, deliberated in detail the crucial five emergency matters, focusing on critical issues of Xenophobia, Islamophobia, protection for Muslim minorities all over the world, plight of Palestinians and the humanitarian crisis in wake of the cyclone that hit African countries of Mozambique, Malawi and Zimbabwe.