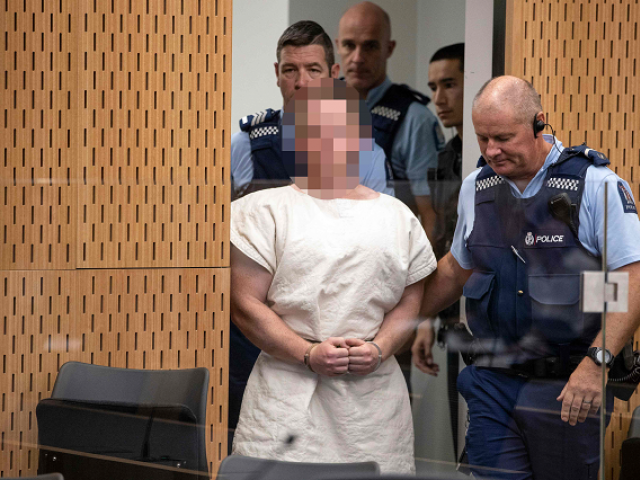 Breton Tarrant presented before the New Zealand. PHOTO COURTESY: SKYNEWS
CHRISTCHURCH: Australian Brenton Tarrant appeared in a New Zealand court on Friday where the suspected white supremacist was charged with an additional 49 counts of murder at two mosques last month.


In an attack broadcast live on Facebook, a lone gunman armed with semi-automatic weapons targeted Muslims attending Friday prayers in Christchurch on March 15, killing 50 worshippers and wounding dozens of people.

Tarrant, who was charged with one murder a day after the shooting attack, was also charged with 39 attempted murders on Friday.

The High Court judge overseeing the appearance ordered Tarrant to undergo a mental assessment to determine whether he was fit to stand trial. He was not required to submit a plea.

Tarrant, 28, has been moved to New Zealand’s only maximum-security prison in Auckland and appeared at the Christchurch High Court through a video link.


Tarrant was then remanded to custody until June 14.

High Court Judge Cameron Mander said whether Tarrant would be required to enter a plea at his next appearance depended on his mental health assessment and “any other developments”.

Prison officials say Tarrant is under 24-hour surveillance with no access to media, according to news reports.

He appeared via video handcuffed and seated, wearing a grey prison t-shirt. He listened calmly throughout the hearing, which lasted roughly 20 minutes.

Around two dozen family members of victims and some survivors of the attacks were present in the courtroom.

“The man had no emotion,” said Tofazzal Alam, a regular at one of the mosques, when asked about seeing the suspect on video.

Tarrant would be represented by two Auckland lawyers, one of them, Shane Tait, said in a statement on his website, which did not include any comments on the case.

Tait on Friday said he was arranging for his client to receive psychiatric assessment and that the process would take “some months”, according to court minutes.

“As I observed at this morning’s hearing, that is a usual and regular step for counsel to take at this point in the proceeding,” said Judge Mander.

Media had reported that Tarrant wished to represent himself and legal experts have said he may try to use the hearings as a platform to present his ideology and beliefs.

“If he has lawyers, he will be speaking a lot less in court,” said Graeme Edgeler, a Wellington-based barrister and legal commentator. “He can still give evidence...that’s possible, but if he’s represented by lawyers and it goes to trial he won’t be asking questions of people.”

Although journalists were able to attend and take notes, coverage of the hearing was restricted, with media only allowed to publish pixilated images of Tarrant that obscure his face. The judge also suppressed the names of people he was alleged to have attempted to murder.


Muslims worldwide have praised New Zealand’s response to the massacre, with many singling out Ardern’s gesture of wearing a headscarf to meet victims’ families and urging the country to unite with the call: “We are one.”

Thousands of visitors to the reopened Al Noor mosque, where 42 people were killed, have offered condolences and sought to learn more about Islam, said Israfil Hossain, who recites the daily call to prayer there.

“They are coming from far just to say sorry ... although they never did anything to us,” said Hossain, 26.

On Thursday, a group of Carmelite nuns stood for the first time inside a mosque, holding back tears as they talked with worshippers about the two faiths.

“Everybody has their own problems and they have their own ideas about religions, and that’s fine, and we should all have that, we’re all different,” said one nun, Sister Dorothea.

“But we’re all humans and that’s the most important thing, our humanity.”