Insist­s IMF has made no demand for rupee deprec­iation; curren­cy is at equili­brium
By Salman Siddiqui
Published: April 5, 2019
Tweet Email 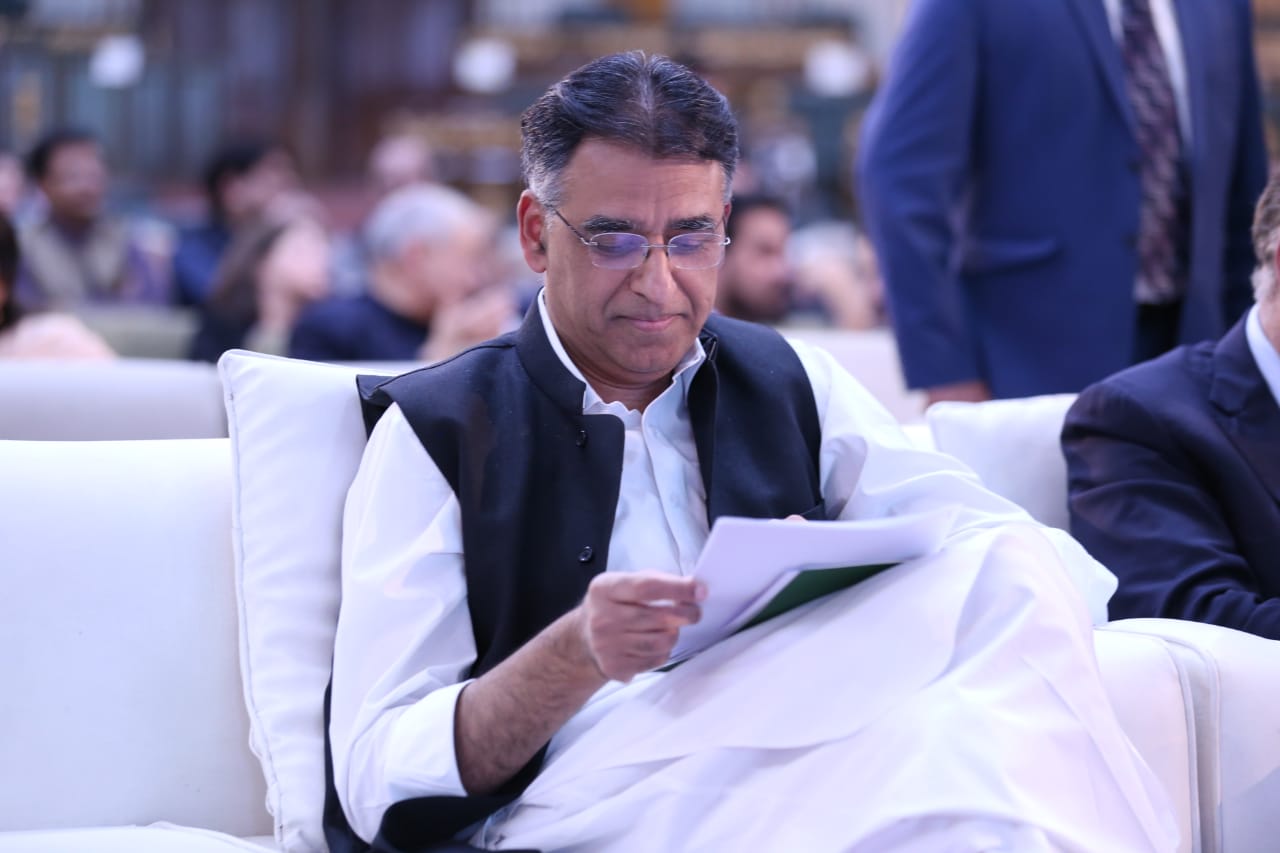 KARACHI: Finance Minister Asad Umar on Friday ruled out the need for further depreciation of the rupee, saying that the currency stands at its equilibrium.

“The International Monetary Fund (IMF) has made no demand for rupee depreciation,” Umar clarified while speaking at the Pakistan Stock Exchange (PSX) through a video conference.

The Real Effective Exchange Rate (REER) of the rupee was overvalued at Rs127 in January 2018. “Today, the State Bank of Pakistan (SBP) has clarified that the rupee is standing at the equilibrium,” he said.

“Stop circulating rumours that Asad Umar has said the rupee will depreciate to 160 or 180,” he added, while dismissing reports of further currency weakness.

The finance minister’s statement came after the State Bank let the rupee depreciate 1.8% – or Rs2.55 to Rs141.39 – in the inter-bank market in the past four weeks since March 8.

Umar’s comments followed a statement by the State Bank of Pakistan’s Banking Policy and Regulations Group Executive Director Syed Irfan Ali, who said the rupee would not depreciate against the US dollar anymore as the government had made six major foreign payments last week.

The statement was released by the Pakistan Forex Association after the central bank official met a delegation of currency dealers on Thursday.

“The government has no intention of letting the rupee lose further value,” the SBP official was quoted as saying. “The rupee may go down at times when the demand for dollar increases. However, that will be a temporary phenomenon as the rupee will later recover.”

Cumulatively, the rupee has weakened 33.7% in a free-fall against the US dollar since December 2017. At the same time, the rupee fell to Rs143 against the greenback in the open market.

The finance minister addressed stockbrokers on the occasion of formal listing of Interloop Limited at the PSX. It emerged as the top volume leader of the day with trading in 14.32 million shares. Its stock closed at Rs46.15 with an increase of Rs0.05 or 0.11%.

Umar encouraged people to invest in stocks rather than dollars, adding that in the next budget measures would be introduced, which would help propel the capital market to a historic high.

Umar said the federal government had taken tough decisions to make Pakistan part of the world economy. Urging people to cope with the current challenges, he said the situation was due to the corrective measures taken by the government to improve the economy. “These will bear fruit in the shape of foreign investment in good times,” he stressed.

“The size of Pakistan’s documented economy is $300-350 billion. It has to be part of the world’s $70-trillion economy,” he said and underlined the need for an increase in exports.

“Unless we learn how to swim in the world’s large pools, we cannot develop Pakistan as a world-class economy; we cannot smartly manage debt, introduce sustainable solutions and create the much-needed job opportunities,” he said. The minister said “there are two ways – either get isolated like North Korea and forget about everything or integrate into the global economic system and international community, which is not an easy task.”

For this, “we need to change mindset. We have to implement disclosure rules and document the economy. The world is not ready to accept us as we are at present. So, increasing Pakistan’s exports is a must to become part of the world and its economies.”

Umar said “we know our capital markets are overregulated and the overregulation is serving no purpose.”

He urged the Securities and Exchange Commission of Pakistan (SECP) to make it easier for the companies to get listed and make market attractive for the people so that they could invest in listed companies.

“The SECP should implement best international practices in capital markets. We have to get rid of the government way of thinking.”

He suggested there was no need for repeatedly engaging in the “Know Your Customer” (KYC) process before allowing stockbrokers and investors investment in the stock market.

“I assume investors do not bring capital in a briefcase to invest in the stock market. They must be having bank accounts and if banks have completed the KYC procedure so what is the need to do it again in the capital market,” he said.

Inviting attention of PSX Managing Director Richard Morin, the finance minister assured him that the budget proposals that they had discussed in detail for improving the investment environment at the stock market, would be incorporated into the next fiscal year’s budget.

“Multinational companies take decisions for millions of dollars in just 12 hours and not a single penny goes to corruption. Here, six to eight months are taken to make such decisions and even then 40-60% money goes to corruption,” he said. “We have to revisit mindless regulations.”