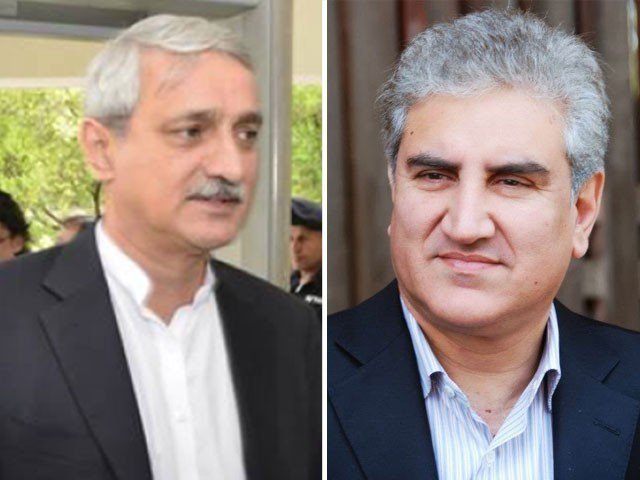 Speaking to the media in Lahore, Qureshi said Tareen attending official meetings was an excuse for the opposition to rail on against the government.

The foreign minister said he would ask Tareen to ponder over how his attendance in the meetings gave Pakistan Muslim League-Nawaz spokesperson Marriyum Aurangzeb a chance to hold press conferences.

He asked Tareen to offer advice while remaining in the background. “When you [Tareen] come and preside over meetings, objections are raised. The same officers and ministers come out and talk," he said.

The senior leader said the party's former general secretary should refrain from doing anything which would lead to fingers being raised.

The Supreme Court in 2017 disqualified Tareen under Article 62 (1) (f) of the Constitution.

The court observed that failure to declare the 12-acre Hyde House in his nomination papers, and the false statement that he had no beneficial interest in the UK property, had led to the disqualification.

Tareen was quick to respond to the federal minster's remarks on Twitter, saying that, "There's only one man in my life whom I consider my leader and to whom I'm answerable. His name is Imran Khan."

He added that he had stood by the prime minister's side "through thick and thin and will continue to do so".

There's only one man in my life whom I consider my leader & to whom I'm answerable. His name is Imran Khan. I've stood by his side through thick and thin and will continue to do so till my last breath, IA. What others may say for their own strange reasons does not concern me .


The PTI leader added that whatever others said for their own reasons is not his concern.

Other party leaders also came out to in Tareen's defence.

“His [Tareen’s] attendance in Cabinet meetings is the wish of the prime minister. Senior leadership should respect the prime minister’s wishes. The court decision against him [Tareen] was unfortunate and he has been barred from elections, not from the heart of PTI workers,” Chaudhry tweeted.

JKT sits in official meetings on the insistence of cabinet members including myself.He has selflessly done a lot for the party,we respect him as a senior colleague &learn from his expertise.Nobody in the party can DICTATE us,PM is our leader & we take instructions from him only.