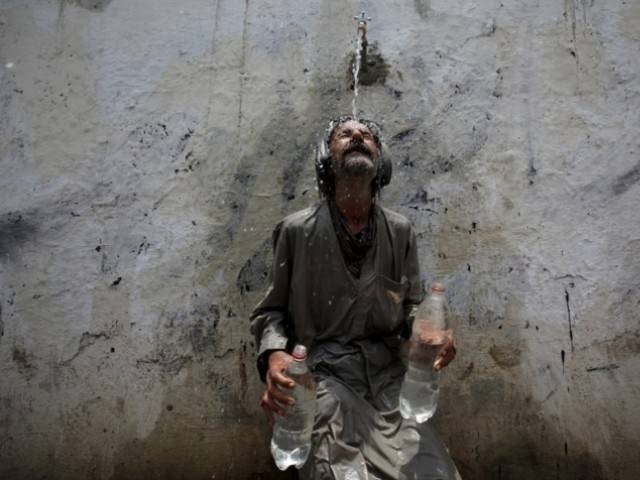 Mercury is also set to rise in the coming days. PHOTO: REUTERS/FILE

KARACHI    : According to Chief Meteorologist of the Pakistan Meteorological Department Abdul Rashid, 2019 will be the hottest year since 2015. Temperatures will rise in the coming days, he said adding that May and June will be extremely hot. The chief meteorologist said that efforts were being made to control the rising temperatures in Pakistan.

He was speaking at a ceremony organised to celebrate the World Meteorological Day on Saturday at the Institute of Meteorology and Geophysics (IMG). The ceremony was titled ‘Sun, Earth and Climate’ and attended by Chief Meteorologist Abdul Rashed, IMG Director Sardar Sarfaraz, former chief meteorologist Tauseef Alam and former director Muhammad Salahuddin as the chief guest.

“We ourselves are responsible for many things including climate change. We have cut our forests in great numbers without thinking and it has severely affected the environment,” said Saluhuddin.

The director said that the use of solar energy was rapidly increasing in the world and the Sun was the most important alternative source of energy.  Life on Earth is indebted to the energy provided by the Sun which affected the weather, oceanic circulation and the water cycle, he said. The Sun also affects our mood, daily activities and routine, as well as arts like music and painting, added.

The Sun, which is at a distance of 150 million kilometres from the Earth, is the centre of our solar system, and its distance from the Earth keeps the temperature maintained at an adequate degree to sustain life on Earth, he explained.

The burning ball made up of luminous material has been generating weather patterns and the atmosphere on Earth for around 4.5 billion years, he said. The director informed the participants that planetary observations and surveys of the last 23 years have shown that there has not been any significant increase in the heat produced by the Sun and hence it could not be declared the cause of rising temperatures on Earth.

Addressing the ceremony, Chief Meteorologist Abdul Rasheed said that according to scientists, the temperature could increase by three to five degrees by the end of this century. Efforts were being made to control rising temperatures in Pakistan, he added. According to Rasheed, no increase could be seen in the number of tropical cyclones.

Rasheed informed that predictions by the Met office were being made through other instruments till their radar was made functional. “We strive for the best instruments to be brought here so the organisation can perform better,” he said adding that observatories could not be established in five districts of Karachi but the organisation will be successful in the coming years. “We have installed rain gauges at the houses of our staff members so that rain in different areas could be measured,” said Rasheed. According to Rasheed, Japan has given two more radars to the organisation and one will be installed in Karachi and the other in Islamabad. He informed that negotiations with the World Bank were underway for a soft loan of Rs10 billion for a new project. He said that a radar was to be installed in Sukkur as well and although the resources at Pakistan’s disposal were limited, the organisation was working towards development.

An exhibition showcasing instruments of measuring temperature, atmosphere, earthquakes and the amount of water was on display in three rooms. The retired director, Salahuddin, cut the ribbon and inaugurated the exhibition later. The exhibition named ‘Sun, Earth and Climate’ will continue till tomorrow (Monday).