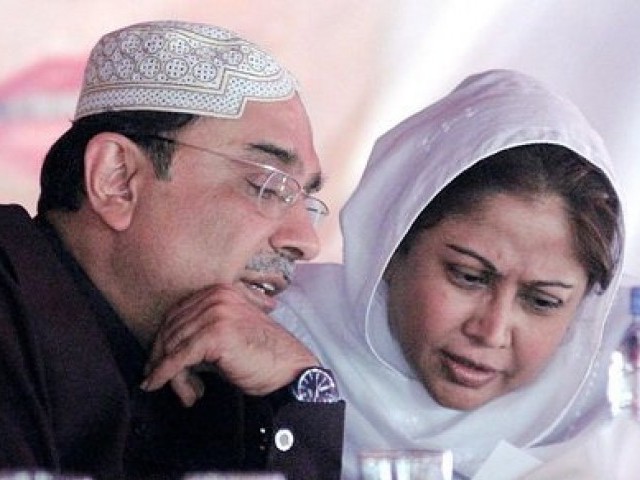 KARACHI: A banking court on Friday transferred the fake bank accounts case against former president Asif Ali Zardari, his sister Faryal Talpur and others to Rawalpindi, granting an earlier request by the National Accountability Bureau (NAB). The court also cancelled interim bail of the 19 suspects in the case.

Following the verdict, NAB issued notices to Zardari and Bilawal Bhutto summoning them to its Rawalpindi office on March 20.
Zardari appeared before the court after the verdict had been announced. Talpur’s counsel, meanwhile, informed the court that his client was sick, and filed an application for the court to grant her permission to skip the hearing.

Defence counsel Farooq H Naik, Shaukat Hayat and other lawyers as well as suspects and Pakistan Peoples Party members of Sindh Assembly were present during the announcement of the verdict, while jail officials presented Hussain Lawai, Abdul Ghani Majeed and Taha Raza at the court.

The verdict, which was reserved earlier this month, also ordered authorities to return surety money to the suspects thus cancelling their interim bail. As the verdict was announced, one of the co-accused left the court, following which a team of the Federal Investigation Agency (FIA) went after them to make arrests.

After Friday’s hearing, Farooq H Naik told the media that he would consult his clients about the course of action that should be taken. He said that NAB chairman had the powers to order the arrest of any suspect during the course of investigation as it could treat the existing

FIR as a reference. “When taken as reference, then the matter of issuing summons or arrest warrant remains at the discretion of the court.”

Meanwhile, Azhar Siddiq, counsel for one of the suspects, said that the Supreme Court in several of its hearings maintained that the case will not be heard in Sindh. “In Sindh, NAB issues non-bailable arrest warrants while the case for Punjab and other provinces is different where only the NAB chairman can order issuance of arrest warrants under NAB’s section 24,” he said.
Zardari objects to transfer of money laundering case to Islamabad

No such warrant has been issued in this case till now so I do not think that there is a need to approach any court for bail, he added.
Legal experts are of the view that once NAB formally files a reference in the accountability court in Rawalpindi, it will be the court’s discretion whether to issue summons for case proceedings or the arrest warrant.

In the notices issued to Zardari and Bilawal, NAB has summoned the two to appear before the joint investigation team on March 20 and record their statements. They have been asked to bring details of their bank accounts and companies. Sources add that summonses will be issued to others as well in connection with the case.

Meanwhile, Zardari has consulted legal experts in the banking court in this regard, with sources adding that he, along with Faryal, may approach the Sindh High Court for bail in the next few days.