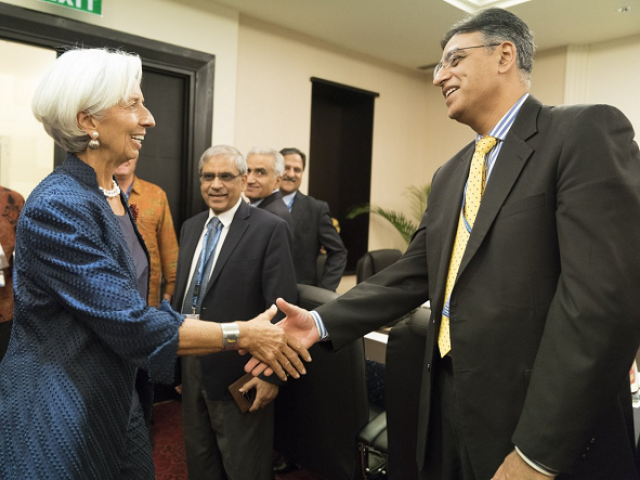 ISLAMABAD: Finance Minister Asad Umar on Friday said no final amount had yet been agreed as Pakistan continues negotiations for an International Monetary Fund (IMF) programme.

Addressing a ceremony in Islamabad, the finance minister said further discussions would be held as the IMF mission chief was arriving in Pakistan on March 26.

He informed the gathering that a delegation of the Financial Action Task Force’s (FATF) Asia Pacific Group was also scheduled to visit Islamabad on March 25.

Umar said Pakistan was pursuing a policy of increased global engagement and cooperation. “Pakistan wants strong economic ties all over the world. We have already established long-term links with China and have also drawn up a trade framework with Turkey.”

He said Islamabad was also playing its due role for stability and development in South Asia. “We are all for including Iran and Afghanistan in regional development schemes. It is unfortunate that political problems have affected our trade ties with these countries.”

On the recent tensions with India, the minister reiterated that Pakistan’s commitment to peace must not be construed as weakness. “We do want to normalise our ties but we will not chase after New Delhi. If our gestures are not reciprocated, we will respond accordingly.”

Last week, Pakistan asked the FATF to remove India from the co-chair of a body that is reviewing progress on Islamabad’s implementation of an action plan.

The finance minister wrote to FATF President Marshall Billingslea, asking him to appoint any other member as co-chair of the Asia-Pacific Joint Group in place of India.

The move, he wrote, was essential to ensure that the FATF review process remained fair, unbiased and objective.

“India’s animosity towards Pakistan is well known and the recent violation of Pakistan’s airspace and dropping of bombs inside Pakistani territory is another manifestation of India’s hostile attitude,” the minister wrote.

The Joint Group is a sub-body of the International Cooperation Review Group (ICRG) of the Asia Pacific Group. Pakistan is a member of the APG and its case is being presented before the FATF by the APG. India’s Financial Intelligence Unit’s (FIU) director general is the co-chair of the Joint Group.