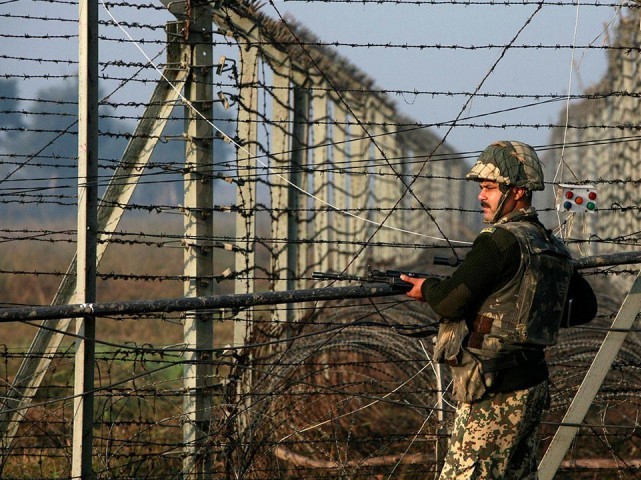 ISLAMABAD: A month after a suicide car bombing in Indian Occupied Kashmir sparked tensions between Pakistan and India, an internal assessment of the government has concluded that the threat of further escalation in tensions between the two nuclear-armed neighbours is over.

The assessment was shared by a senior official on Monday while giving a background briefing to a group of journalists on the current state of relations between the two neighbouring countries.

“There is a visible de-escalation in tension,” the official said.

More importantly, the official informed the journalists that Pakistan did not foresee any further ‘aggressive action’ from India.

The military standoff was triggered by Indian claims of carrying out air strikes, targeting alleged terrorist camps inside Pakistan on February 26.

Pakistan also captured an Indian pilot but released it within 72 hours as gesture of peace.

But given the setback India suffered, there have been concerns that the Modi administration may launch more strikes or escalate the situation to end the crisis on a high note.

When asked whether Pakistan feared another possible ‘misadventure’ by the Modi government before the elections in India, the official confidently replied: “There is no room for such aggressive action from India.”

The upbeat assessment of the government is apparently linked to hectic diplomacy involving many regional and international players, seeking de-escalation in tensions between the two countries.

One player that is visibly active on this front is Saudi Arabia, whose top diplomat on Monday visited New Delhi just days after a trip to Islamabad.

It appears that Saudi Arabia along with the UAE is trying to broker some kind of a deal between Pakistan and India.

In a first sign of easing of tensions, Pakistani and Indian high commissioners resumed their diplomatic work in Islamabad and New Delhi on Saturday.

Both countries recalled their envoys soon after the Pulwama attack, which India blamed on the banned Jaish-e-Muhammad (JeM).

The official said Pakistan took a unilateral step to return its high commissioner to India which then also reciprocated the move.

The official noted that Pakistan never wanted any escalation in tensions and that was the reason it decided to go ahead with the planned talks on the Kartarpur Corridor.

“The purpose of the call was to provide him Pakistan’s perspective on the recent regional developments,” said a statement issued by the Foreign Office.

Foreign Minister Qureshi said that Indian aggression of  February 26 was a violation of Pakistan’s territorial integrity and sovereignty as well as the UN Charter.

He also said that Pakistan’s response on  February 27 was purely in self-defence against external aggression.

Qureshi informed Ambassador Bolton about the de-escalatory measures taken by Pakistan. He said that Prime Minister Imran Khan had decided to hand over the Indian pilot as a gesture of goodwill towards India.

Pakistan wished peace and stability in the region. Pakistan’s High Commissioner to New Delhi had also returned to Delhi after consultations.

Pakistan would send an official delegation to India on March 14 to discuss the agreement on the operationalisation of the Kartarpur Corridor. Pakistan was also ready to continue weekly contacts at the Military Operations Directorate level.

Ambassador John Bolton said that he and Secretary of State Pompeo, despite being actively engaged in talks with DPRK in Hanoi, monitored the developments between India and Pakistan and kept contact with the leadership of two countries to ensure that the security situation in the South Asia region did not deteriorate.

He appreciated Pakistan measures which had helped lowering the tension and urged continued restraint on both sides.

The need for a dialogue between Pakistan and India to find peaceful resolution of all outstanding disputes was also emphasised.

The US security adviser also appreciated Pakistan’s important role in the Afghan peace process. Both the leaders agreed to work together to pursue the process.

Taxmen can seize assets held in other than owner’s names