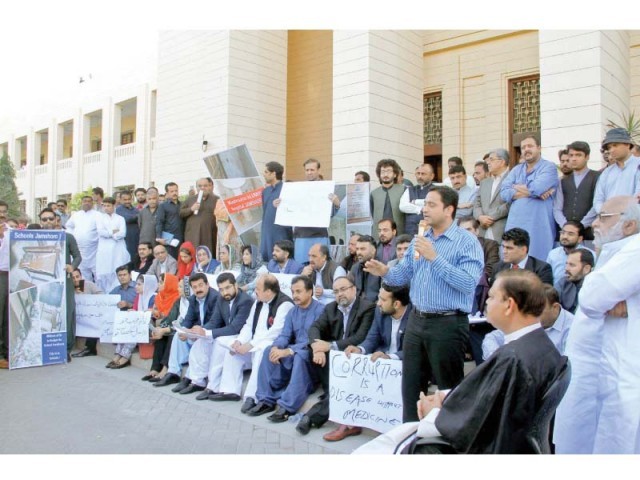 Protesting members of the opposition parties gathered outside the assembly building after the session was adjourned. PHOTO: PPI

KARACHI: The opposition on Tuesday continued its protest for the second day in Sindh Assembly and later held a “mock assembly session” at the main gate of the assembly building, demanding that the chairmanship of Public Accounts Committee (PAC) – the provincial legislative watchdog – be handed over to opposition parties.

Amid the noisy session that started with the protest, the lawmakers belonging to Muttahida Qaumi Movement – Pakistan (MQM-P), Pakistan Tehreek-e-Insaf (PTI) and Grand Democratic Alliance (GDA) staged a sit-in before the Speaker’s podium and shouted slogans of “Go Zardari go, no corruption no”. The treasury members responded by shouting slogans of, “Ro Imran ro [Cry Imran, cry].”

As the session started, opposition leader Firdous Shamim Naqvi of PTI and MQM-P MPA Mohammad Hussain raised the issue of standing committees that are yet to be formed. Speaker Agha Siraj Durrani, refusing to listen to them said, “I have to finish the agenda and will give you a chance afterwards”. But, the opposition members [except Muttahida Majlis-e-Amal and Tehreek-e-Labbaik Pakistan] who already had decided to give tough time to the government started protesting in the House and began thumping their desks.

Pakistan Peoples Party minister Imtiaz Shaikh addressing the Speaker said, “This is not the way”. He said that the opposition was displaying rowdyism in the House.

After the session, the opposition parties gathered outside the assembly and held a “mock session” nominating Hussain to chair the session. Naqvi was nominated as the opposition leader and Khawaja Izharul Hassan as the parliamentary leader of his party. Hussain, who had donned the Speaker’s gown, presided over the session on a chair while members sat on the stairs of the assembly building. The lawmakers moved resolutions on water, sanitation, health and education issues.

Wasimuddin Qureshi of MQM-P criticising Speaker Durrani, who is currently in custody of the National Accountability Bureau (NAB) and comes to chair the session, said, “Not only the Speaker, but the entire assembly seems to be under NAB’s remand”. He said that Durrani comes to assembly soon after NAB finishes its morning investigations due to which the session scheduled at 2pm is delayed by two to three hours.

He expressed dismay over the officials of Karachi Water and Sewerage Board (KWSB) who according to him have turned blind eye to people’s problems.

Haleem Adil Sheikh of PTI, while addressing the “mock session” drew attention towards civic issues and alleged that the ruling party – PPP – had even failed to provide potable water and sanitation in Larkana, Benazirabad and other strongholds of the party. “Nothing will happen in this assembly. It is defending the thieves sitting inside it”.  According to Sheikh, PTI and other opposition members who have gotten a mandate from their constituencies continue raising genuine issues of their voters.

Garbage is piling up in Karachi every day, he said lamenting, “Local government department has totally failed and we have no other option, but to throw the garbage at the minister’s doorsteps”.

While speaking to the media, PPP Minister Nasir Shah termed the opposition’s protest as “drama”. He said, “This protest is aimed at getting cheap publicity”. He added that there were a total 34 standing committees of various government departments in Sindh Assembly of which 14 have been offered to opposition parties.  “In these 14 committees, we have given them eight departments of their choice, but they are demanding PAC under their command, which is not possible”.

Referring to the rules of the assembly, Shah said, “There is no rule or law that obligates the government to appoint opposition leader as PAC chairperson. No one can challenge us even if we don’t allot a single standing committee to them.”