Khursh­eed leads walkou­t on second day over blacko­ut of his speech on PTV
By Qadeer Tanoli
Published: May 31, 2017
Tweet Email 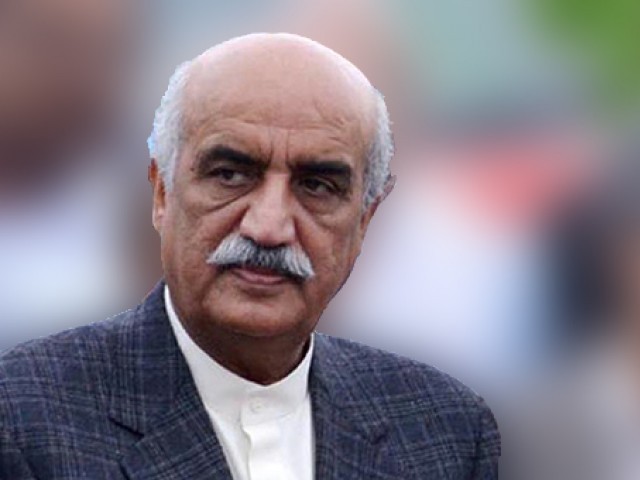 ISLAMABAD: For the second straight day the opposition staged a walkout after their speeches over the federal budget were not broadcast live on the state-run Pakistan Television (PTV) and announced they will hold a mock session outside parliament to press their demands.

The opposition also hinted that they would create problems for the government during the president’s address at the joint sitting of parliament on July 1.

Leaving no holds barred, the opposition also lashed out at the government for setting up a new tradition of initiating the budget debate themselves, rather than allowing the opposition to start the debate which was the established norm.

Interestingly, in Tuesday’s debate six lawmakers of the ruling PML-N took part in the general discussion on the budget. Two PPP lawmakers tried pointing out quorum twice during their speeches, however, it was found to be complete on both the occasions.

The assembly resumed its discussion on the budget under Speaker Ayaz Sadiq’s chairmanship. However, on a point of order Opposition Leader Khursheed Shah said the treasury benches themselves launched the budget debate and in these circumstances who would accept the budget.

He reminded the government how it was willing to accept all the demands of his party during the PTI sit-in in 2014.

“My speeches were telecast live in 2014. Every effort was made to make me happy. How can I find those days. Nowadays they even fear broadcasting my speech live,” Shah commented bitterly and sarcastically. He added that it’s not a democratic practice to seal the lips of the opposition.

Shah informed the government that he will only make a speech on the budgetary proposals if his speech is broadcast live on state media.

He announced the opposition will boycott the National Assembly session and hold the next session outside parliament if his demands are not met.

The minster added that it was only once, under special circumstances, that the opposition leader’s speech was broadcast live. He added that present government has given unprecedented space to the opposition.

PTI’s Shah Mehmood Qureshi urged the government to review its decision in order to make the budget session of the lower house meaningful. He added that the attitude of the government was not appropriate.

The PTI leader also warned the government to avoid suppressing the voice of the opposition; otherwise, their voice would rise from somewhere else.

Qureshi also told the house that some members of the government were acting a bit ‘foolish’. “They are coming in the way of their own government,” he added.

Following the speeches the opposition staged a walkout from the house in protest against the government’s decision.

Meanwhile Khursheed Shah has also called a joint meeting of opposition parties in the National Assembly and in Senate on Thursday in the Committee room number 2 of the Parliament House.

The meeting would discuss devising a joint strategy when the President would address the joint sitting of parliament.