Goalke­eper has won Red Devil's player of the year for four of the past five season­s
By AFP
Published: March 5, 2019
Tweet Email 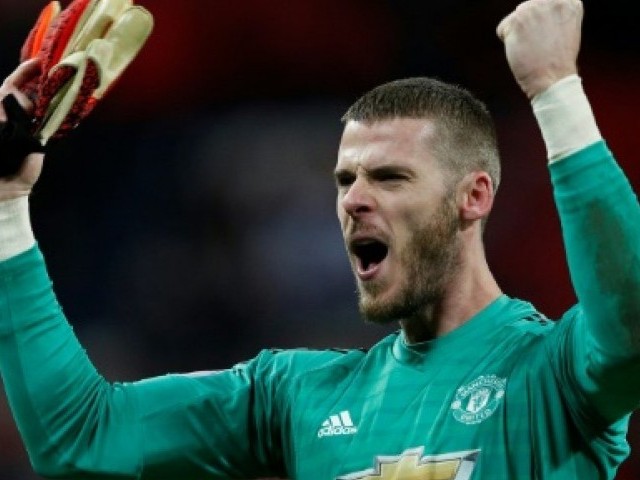 The Spanish number one made two brilliant stops from Kylian Mbappe and Juan Bernat three weeks ago as PSG threatened to run riot to again underline his calibre as one of the best goalkeepers in the competition. PHOTO: AFP

LONDON: Manchester United’s solitary defeat 16 games in to Ole Gunnar Solskjaer’s caretaker reign in charge against Paris Saint-Germain exposed the gulf the English giants still have to bridge to become a European powerhouse once more.

But that the Red Devils travel to Paris on Wednesday trailing only 2-0 from the first leg of their Champions League last 16 tie is thanks to David de Gea.

The Spanish number one made two brilliant stops from Kylian Mbappe and Juan Bernat three weeks ago as PSG threatened to run riot to again underline his calibre as one of the best goalkeepers in the competition.

With Paul Pogba suspended for the return to his native city, De Gea is the one United player who could walk into a PSG side that has divided goalkeeping duties between 41-year-old Italian legend Gianluigi Buffon and Alphonse Areola this season.

Worryingly for United that prospect is all too real with De Gea so far holding out in contract negotiations to prolong his current deal beyond the summer of 2020.

According to reports, De Gea is seeking at least parity with Alexis Sanchez as the club’s highest earner.

The Chilean joined United on a contract worth up to £500,000 ($660,000) a week including bonuses last January, but has not had anywhere near the desired impact, scoring just five goals in 41 appearances.

By contrast, De Gea has won United’s player of the year for four of the past five seasons and believes his consistency should be rewarded.

But for a matter of minutes on the final day of August in 2015, De Gea’s career could have been very different. A similar contract standoff between the player and club seemed to pave the way for a move to Real Madrid only for the fax confirming the transfer to miss the deadline.

Madrid have since gone onto win the Champions League for the past three seasons with Keylor Navas in goal. The Costa Rican has performed well, but is not seen as being in De Gea’s class, as evidenced by the fact Real pounced to sign Thibaut Courtois earlier this season when the Belgian also refused to extend his contract at Chelsea.

As Real have reigned in Europe, United have faded. In the four seasons before De Gea signed, Alex Ferguson’s side reached three Champions League finals. In the seven seasons since, United have made the quarter-finals just once and look likely to fall short of the last eight once more.

Courtois’s arrival appears to have closed the door to a move to Madrid.

However, PSG and Italian champions Juventus are reportedly interested and could offer De Gea the guarantee of Champions League football — while United battle just to make the Premier League’s top four once more — as well as a better chance to compete in the latter stages unless big changes are made at Old Trafford.

Solskjaer hailed De Gea as “the best goalkeeper in the world” this week as he pleaded with him to commit his future to the club.

The Norwegian has lifted the mood of players, staff and fans with is affable nature off the field and much improved results on it, making him the front runner for the manager’s job on a full-time basis.

A huge task remains ahead for whoever is in charge, though, not just to recruit the right players to make United contenders for titles at home and on the continent once more, but to convince one of their few truly world class talents United’s new project is worth hanging around for.