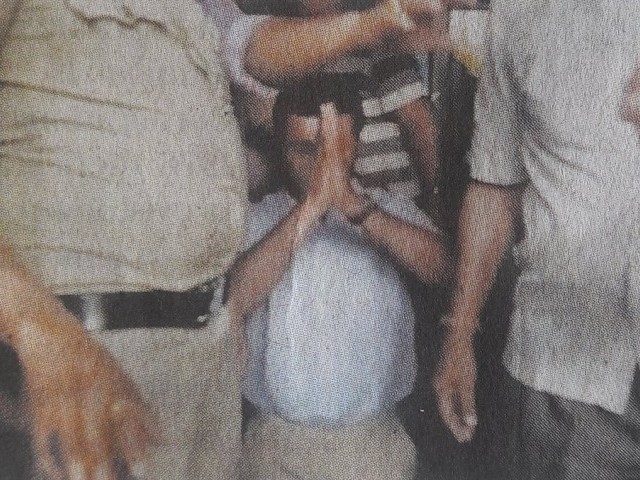 Indian professor forced to apologise on his knees in presence of the police. PHOTO COURTESY: TWITTER/ @samar11

Students belonging to a Hindu extremist group forced a professor to kneel down and apologise for praising Pakistan at a university in India’s Karnataka on Sunday.

Sandeep Wathar, a left-leaning professor and activist, had praised Pakistan for releasing Wing Commander Abhinandan Varthaman in a Facebook post which was later deemed as an “anti-national” statement by the Akhil Bharatiya Vidyarthi Parishad (ABVP) right-wing activists at the college, reports The Times of India.

In his post, Wathar had criticised Indian Prime Minister Narendra Modi as well as the BJP and called Pakistan an intelligent nation.

Wathar was made to delete the posts after angry student activists belonging to ABVP protested against him at the college campus.

The professor was made to kneel down by the agitating students and forced to apologise for his remarks in the presence of Indian police.

“Being responsible student wing we always stand with National Security, lecturer of particular college gave an Anti-National statement which was condemned by student community (sic),” ABVP Karnataka said on Twitter following the incident.

Being responsible student wing we always stands with National Security, lecturer of particular college gave a Anti National statement which was condemned by student community. #NationFirst

Meanwhile, college administration said they will meet on March 5 to review the matter and take ‘appropriate’ action against the professor.

This article originally appeared in The Times of India.