If we don't stop brain drain our people will be depriv­ed of health servic­es, says health minist­er
By Our Correspondent
Published: March 3, 2019
Tweet Email 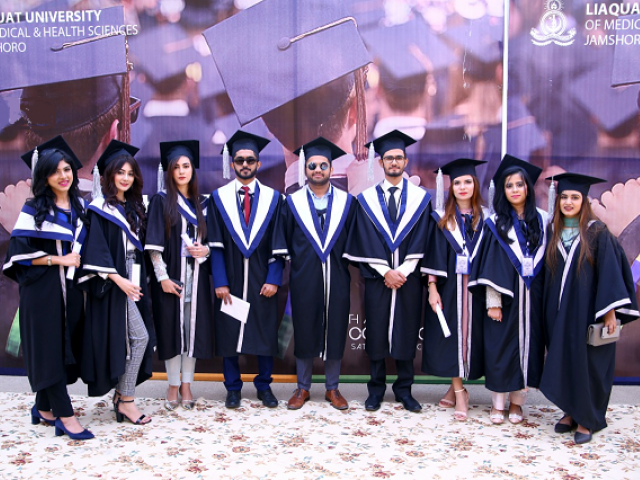 MBBS graduates at the graduation ceremony at Liaquat University of Medical and Health Sciences on Saturday. PHOTO: SHUAIB

HYDERABAD: The Sindh Health Minister Dr Azra Fazal Pechuho has said that the doctors and surgeons qualified and trained in Sindh’s medical institutes often find a job in foreign countries leaving a shortage of doctors behind. “If we don’t stop this trend, our people will be deprived of the health services,” she cautioned while speaking as the chief guest at the 18th annual convocation of Liaquat University of Medical and Health Sciences (LUMHS) in Jamshoro district on Saturday.

On the occasion, the university conferred degrees on 551 graduates at its annual convocation. As many as 356 graduates of Bachelor of Medicine, Bachelor of Surgery (MBBS), 83 of Bachelor of Dental Science (BDS) and 112 postgraduates were among the recipients. Dr Nadia, Dr Habibur Rehman, Dr Tooba, Dr Nomesh Kumar, Dr Aiman Irfan and Dr Momina Owais, among others, were decorated with the gold and silver medals.

The minister said as far as the brain drain of the skilled people was concerned globalisation had negatively affected the country. She said that her department is also confronted with a shortage of funds. According to her, over 60% of the health budget is consumed by salaries and pensions of the employees while a large part of the remaining budget is spent on procurement of medicines and medical equipment.

Dr Pechuho said that Sindh has still not received funds under the National Finance Commission (NFC) Award. “It doesn’t seem like Prime Minister Imran Khan’s government will release funds under the award”.

She complained that the media only reported the child mortality in Thar district even though the same problem of deaths of children existed in all parts of the country. “We have to save lives of children and we are preparing a strategy to do so,” she told.

The minister said that under the strategy, the women in Thar will be provided counselling so that they maintain a gap of some years between the childbirths. “The women in Thar are married early and they give birth every year”.

According to her, the childbirth at home at the hands of untrained midwives is another problem related to infant mortality. The health department is trying to create awareness among the local people to bring their women to the health centres for birth.

“I believe that we should pay more attention towards the preventive side of the health delivery system rather than spending more from the budget on healthcare measures,” she suggested. The minister asked the faculty of Community Health Sciences of LUMHS to initiate campaigns for creating awareness about the preventive side of healthcare more importantly in the rural areas of Sindh.

LUMHS Vice-Chancellor Prof Dr Bikha Ram Devrajani requested the health minister to help the university obtain approval from Sindh government for affiliation of Kotri District Headquarters (DHQ) Hospital and the TB Sanatorium Kotri. He further asked for the minister’s help to establish a college of pharmacy, an institute of diabetes and endocrinology, a school of medical technology and a convention centre.

The VC told that the university has planned to launch a Bachelor of Science (BSc) programme in Forensic Sciences to cater to the needs of the law enforcement agencies, medico-legal experts and the judiciary of Sindh. He informed that Bilawal Medical College, which will operate under the administrative control of LUMHS, has been given certification by the Pakistan Medical and Dental Association (PMDC). The college will provide 100 male graduates of MBBS every year, he added.