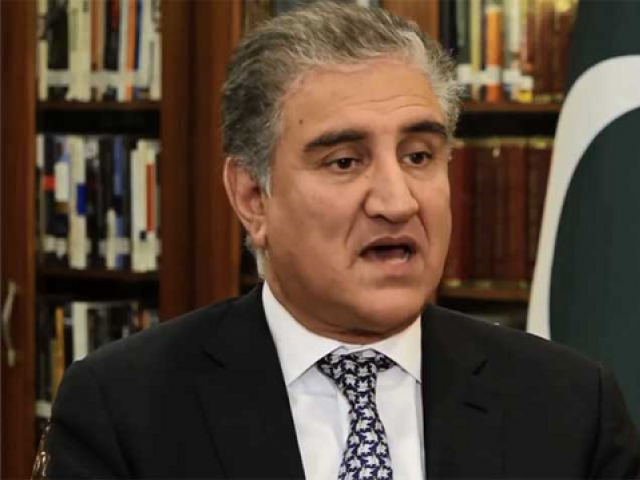 We want peace and stability in the region, and want to focus on the Afghan peace process, says foreign minister. PHOTO: RADIO PAK

LAHORE: Foreign Minister Shah Mehmood Qureshi has said that there was no international pressure for releasing captured Indian Air Force (IAF) Wing Commander Abhinandan and Prime Minister Imran Khan had made this decision as a gesture of peace to defuse tension with India.

“There was neither any compulsion nor any pressure to release the Indian pilot. Pakistan does not want regional peace to be put at stake for the sake of (Indian) politics,” Qureshi said while addressing a news conference on Saturday, a day after Pakistan freed the IAF pilot.

“Now some 21 political parties of India are saying that the Pulwama incident is being used for political motives [by Prime Minister Narendra Modi]. We are united in Pakistan; there is a large constituency even in India which wants peace,” he added.

Responding to a question about violation of the Line of Control (LoC) by India, he said, “Informed and aware people know that return of the Indian pilot was not our weakness.”

To another question, he said the decision to boycott the Organisation of Islamic Cooperation (OIC) meeting was taken with consensus in parliament.

He said the joint session of parliament adopted a 21-point resolution with consensus, which shows that the Pakistani nation is united and wants resolution of issues with India through a dialogue.  Qureshi reiterated that Pakistan reserves the right to self-defence in case of any aggression.

“Our action in response to the Indian aggression was just to show them our capabilities,” he said in reference to the February 26 violation of Pakistan’s airspace by India and Pakistan’s subsequent targeting of open spaces near military targets in Indian-Occupied Kashmir (IOK).

Qureshi said the new government has a development agenda for peace, job creation, investment and growth, adding that democracy always strives for peace, prosperity, economic growth and well-being of the people.

He said he had also held talks with various world leaders and conveyed Pakistan’s desire for peace. “I have also talked with the US foreign secretary and the UN secretary general,” he added.

To a question about death of a Pakistani prisoner in an Indian prison, Qureshi said, “Mob mentality exists everywhere. In Pakistan the Indian pilot was rescued by the army while the Pakistani citizen was killed in Jaipur prison.”

Speaking on the occasion, Punjab Governor Chaudhry Sarwar said it had been decided during his meeting with Qureshi that letters would be written to the members of the UK and EU parliaments, asking them to play a role for peace in the region.

In an interview earlier, the foreign minister reiterated that Islamabad will not allow its soil to be used for terrorism against any state, including India.

“If India had carefully listened to us [in the wake of Pulwama attack], this situation may not have arisen,” Qureshi said in an interview with the BBC on Friday night.

“We had stated that India should give us actionable evidence so we could act. We had assured India that we would cooperate,” he said, adding that Pakistani courts are autonomous and evidence is needed to pursue the case.

“India should give actionable evidence so a case can be prepared on those grounds.” He confirmed that India submitted a dossier on Friday. “If India wants to conduct talks on this, then we are ready for it.”

Elaborating on the prevailing situation, Qureshi said Indian Prime Minister Narendra Modi was currently under pressure and had yet to reply to Islamabad’s peace offer.

“Situation is still critical. Both countries’ armed forces are still on high alert,” he added.

Qureshi said conflicts can only be resolved through dialogue. “We can only move forward by investigating the evidence.”

He clarified that there is still confusion regarding JeM’s alleged role in the Feb 14 Pulwama attack due to ‘conflicting reports’. “We have banned the organisation. Indians were claiming that they had bombed a training camp, we took media there and the whole world saw the reality of their claims.”

India’s Feb 26 air strikes, the first since the war in 1971, targeted open ground and various western experts have debunked New Delhi’s claim after release of latest satellite pictures. India has also failed to provide any evidence of a successful mission and their armed forces remain tightlipped on the issue.

“Where are they [alleged terrorist camps which Indian warplane targeted inside Pakistan on Feb 26]? Where are the 350 bodies [of alleged militants]? Indians themselves don’t believe that the Indian Air Force spent 25 minutes in Pakistanis airspace,” said FM Qureshi.

The minister stated that at this point of time, Islamabad wants to bring the situation under control, adding that one segment of the Indian media was extremely irresponsible by engaging in warmongering and destabilising the region.

“We are nuclear-armed neighbours. Can we afford a war? This is suicide,” he said, reminding India that war between the two countries is a zero-sum game.

FM Qureshi also lauded the Russian foreign minister’s offer to provide a platform for Pakistan and India to hold dialogue. “We support this. Let’s wait for India to decide.” He said China, the European Union and the United Nations secretary general have all offered to play a role in resolving the conflict.

“We want peace and stability in the region, and want to focus on the Afghan peace process where the situation is at a critical stage. We don’t want to divert our attention from Afghanistan, this is a historic time,” he added.