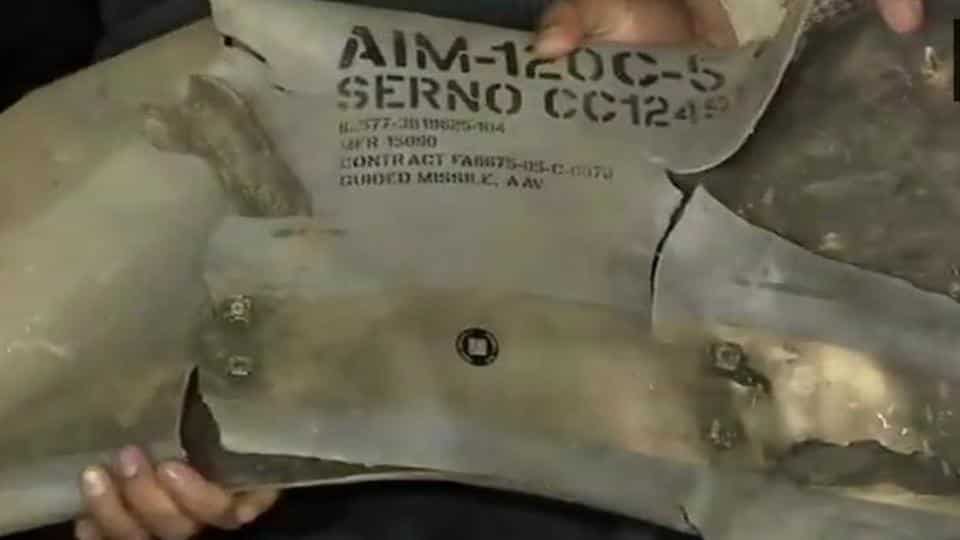 Part of a missile India claims was launched a PAF F-16. SCEREN GRAB

KARACHI: As New Delhi presented what it claimed was ‘incontrovertible proof’ that Pakistan used its F-16 fighter jets in Wednesday’s air action, a US defence department document has suggested that the missile remains the Indian military found could belong to a missile sold by the US to Taiwan.

India’s top military brass on Thursday displayed the remains of an American-made missile as ‘absolute proof’ that the Pakistan Air Force used F-16s in aerial operations conducted the day before. Claiming that the missile could only have been launched by an F-16, the Indian generals tried to strengthen their claims that the Indian Air Force also shot down a PAF F-16 while losing a MiG-21.

A Google search The Express Tribune ran using the keyword ‘AMRAAM’ along with the serial number in question returned links to a US Department of Defense (DoD) document titled “Report to Congress on Department Of Defense Sales of Significant Military Equipment to Foreign Entities Fiscal Year 2009”.

The report revealed that contract number FA867505C0070 corresponded to a batch of AIM-120C-5 AMRAAM missiles supplied to Taiwan in a Foreign Military Sale worth $2.38 million.

It should be noted that Pakistan does not recognise Taiwan as a separate entity from the People’s Republic of China and as such, does not have any diplomatic or consular relations with Taiwan.

How the wreckage of a missile sold to Taiwan ended up in the hands of an Indian military air vice marshal is something only New Delhi can explain.

A version of the report can be found on the official website of the Office of the Under Secretary of Defense for Acquisition and Sustainment. It can be accessed via the following link: