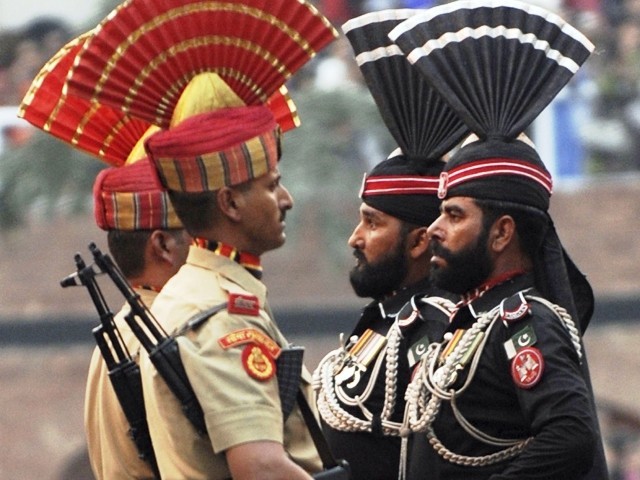 Amid Pakistan-India tensions as the world has been abuzz with predictions that the two nuclear nations could go to war at an all-time high, many countries have tried try to de-escalate the situation.

Modi-led BJP has come under the fire as BS Yeddyurappa, chief of BJP in Karnataka gloated over the escalation and said that the airstrike has “enthused youth” in India and that it will “help us [BJP] in winning more than 22 Lok Sabha seats [in Karnataka]”. While on social media, the very same “enthused youth” is in disgust of the whole scenario and been raging in anger as they took to Twitter to show the same fury with #BJPsPlotToVote despite clarification by Yeddyurappa.

My statement is being reported out of context. I said that ‘situation favourable for BJP’ which i am saying for last couple of months. This is not first time that i said BJP in Karnataka will win minimum 22 seats under the able leadership of Modi ji.

A mad man roaming free in Delhi, he will destroy anything for his electoral gains. #BJPsPlot4Vote #SayNoToWar

Shocking & disgusting to understand #BJPsPlot4Vote. It is unfortunate that @BJP4India is calculating electoral gains even before the dust has settled. No patriot shall derive such sadistic gains over soldiers’ death, only a anti-nationalist can.
What will RSS say about this? pic.twitter.com/w6wAhAg6gv

Only Few of your Caste loving supporters and Cowbelt Migrant’s settled in Karnataka may listen to your cock and bull Story..

We Kannadiga know on what context you are speaking in this video #Shameful. #BJPsPlot4Vote
pic.twitter.com/AsSeGyzwww

Though I am a supporter of BJP, but this statement is not appreciated. Karnataka BJP needs a cleaning have to remove such low comments to win votes. #karnatakapolitics #BJPsPlot4Vote

#BJPsPlot4Vote
One settle for 22 votes and the Other at #KheloIndiaApp launch while #AbhinandanMyHero is silently praying in Pakistan for his save return to his family whom he fight for-Us. Height of shamelessness

WAR has to be avoided. No Other Option.

If Govt wants WAR, it’s our Duty to let it not happen. 💯

Let’s USE every ounce of Will to avoid useless Deaths of Bros on Borders. ❤#BringBackAbhinandan#BJPFailedNationalSecurity#BJPsPlot4Vote #narendra modi #WarAgainstTerrorism

Yeddyurappa’s statement “Airstrikes will help BJP win more seats” is not only deplorable but also reveals the mindset of the BJP. When the entire opposition is with the government in a show of unity, a statement of this kind from a senior BJP leader is lamentable.#BJPsPlot4Vote pic.twitter.com/oFCI3OjSga

On the other hand, Congress is facing the brunt of the Pak-India tensions when the opposition parties in India chided BJP for blatant use of the country’s armed forces for political gains. 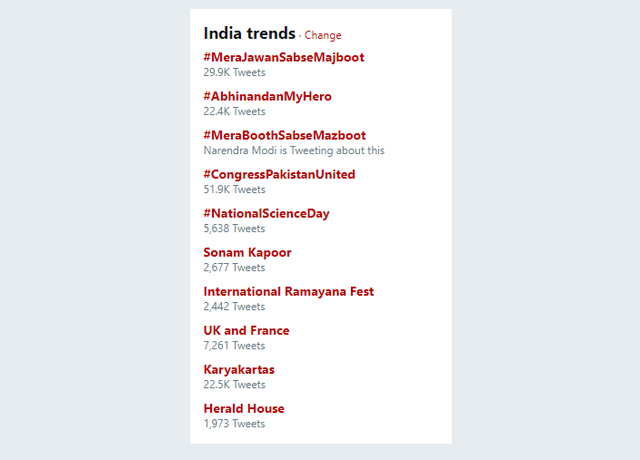 “The prime minister has, regrettably, not convened an all-party meeting as per the established practice in our democracy,” read a joint statement issued by 21 opposition parties.

Whoever started this thread #CongressPakistanUnited has my greetings.

Yes this is absolutely true that the Congress Party & Pakis are united to keep India backward.

In past few days, language used by Pakistani Gafoors on my timeline is same as One used by Congress Party.

Congress never bought 4.5 Generation fighter jets due to which our brave pilot has to face an F – 16 with 50 years old Mig-21.😥😥

Quite obvious that Congress and Pakistan seem to be in some sort of deal to make IAF weak. 😒😡

Do you have little sense @sardesairajdeep , because of him we lost our 40 brave soldiers.
Presstitute &#CongressPakistanUnited pic.twitter.com/mbAgVv02O1

A serpent who should be fed to a mongoose

Has it gone too far & have we become a nation where Mir Jaffars the puppets of paymasters in opposition have no fear to even betray our forces?#CongressPakistanUnited pic.twitter.com/AFZaxKMbO8

Meanwhile, in Pakistan, many users took to Twitter to express their thoughts of #SayNoToWar which included known celebrities, politicians, Pakistani citizens and at some point, the same hashtag was also trending in India. Other trending hashtags also include #PakistanZindabad, #WeSupportPakistanArmy and from yesterday’s media briefing of PM Imran Khan, #LetBetterSensePrevail has also been used by many to show support and laud government and Army’s efforts. 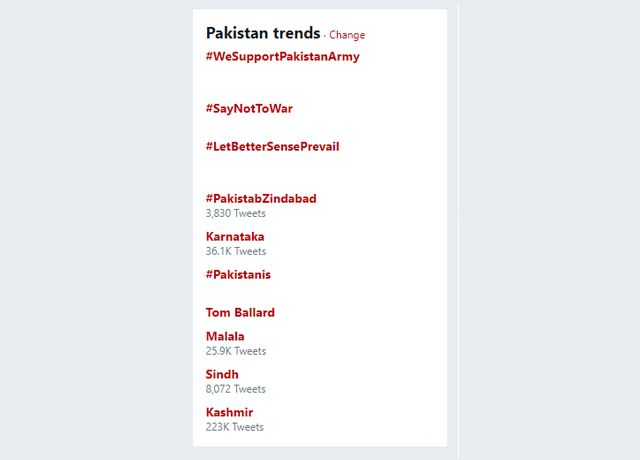 This truly is the real strength of a Pakistani soldier which is hard to fathom for the enemy.#PakistabZindabad#WeSupportPakistanArmy#FreeKashmir#PeaceNotWar#SayNotToWar pic.twitter.com/N0Um3VDlDc

Pride of pakistan! ❤
“Hassan” who shut down India aircraft’s.#WesupportPakistanArmy pic.twitter.com/Z4UzAHMbrd

Tribute to all mothers who sacrifices, they are the real mothers of land🇵🇰❤️💯✔️#WesupportPakistanArmy

U see india, that’s us, The Muslims. We do not fear from your 1000kg bombs or EX – MIG21. 🇵🇰#WeSupportPakistanArmy

We are on the brink of a war that nobody in their right mind in either Pakistan or India want. Imran Khan’s words should be welcomed. Encourage dialogue, commit to deescalation. Anyone who thinks otherwise should for a moment swap places with Abhinandan & his family #SayNoToWar

No matter what you say, have seen so many Pakistanis speak same sentiment today across social media.