Defend­ers of the nation are awake, and the nation has nothin­g to worry about: FM Quresh­i
By Khalid Mehmood
Published: February 26, 2019
Tweet Email 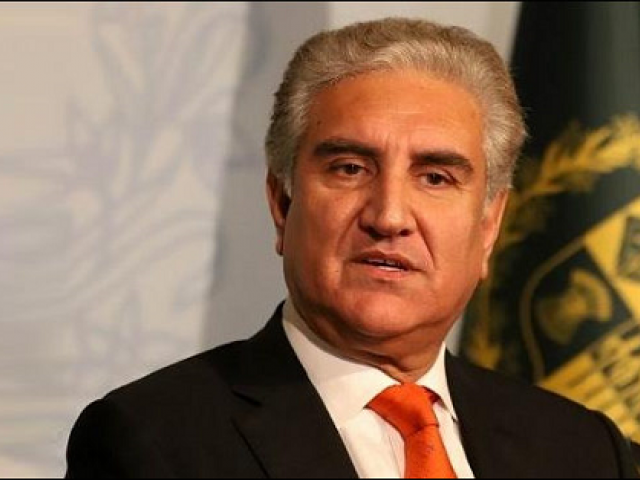 “India has violated the LoC and Pakistan reserves the right to give a befitting response,” the FM said.

The reply by Islamabad comes after India increased the escalation level following the Pulwama attack in Indian-occupied Kashmir (IoK).

Earlier, FM Qureshi summoned an emergency meeting at the Foreign Office (FO) on Tuesday to discuss the situation following the Indian Air Force’s (IAF) violation of Line of Control (LoC).

The current security situation is expected to be discussed during the high-level huddle following the airspace violation by the IAF. The meeting will be attended by former secretaries and senior ambassadors.

The nation has nothing to worry about, the foreign minister said, adding that the sacrifices of martyrs has made peace possible.

“We have fought a successful war against terrorism,” said FM Qureshi

We are a peace-loving nation and are aware of the consequences of terrorism, the foreign minister further said.

Qureshi lauded the armed forces for their prompt reply to Indian aggression and said that “the defenders of the nation are awake, and the nation has nothing to worry about”.

In a follow-up post, he added that the planes violated LoC through Muzaffarabad sector. “Facing timely and effective response from Pakistan Air Force released payload in haste while escaping which fell near Balakot,” he said.

Indian aircrafts intruded from Muzafarabad sector. Facing timely and effective response from Pakistan Air Force released payload in haste while escaping which fell near Balakot. No casualties or damage.

The military spokesperson further tweeted images of the payload dropped by the escaping Indian aircraft.

The LoC violation comes a day after a meeting between army chief General Qamar Bajwa and air chief Anwar Mujahid Khan at the Air Headquarters in Islamabad on Monday.

Amid relentless saber-rattling from New Delhi, the military reiterated that Pakistan’s armed forces are fully prepared for a befitting response to any Indian aggression or misadventure.

General Qamar also visited the headquarters of the Rawalpindi Corps where was briefed by the corps commander on the operational situation and state of readiness along the Line of Actual Contact, Line of Control and Working Boundary.

War frenzy has been sweeping across India even since a young man from Indian occupied Kashmir rammed a vehicle full of explosives into a military convoy in Pulwama, killing nearly four dozen soldiers on February 14.

Islamabad has offered India every possible help to investigate the attack and even held out an assurance that action would be taken if Delhi shared credible evidence of the involvement of any group using Pakistan’s soil for attacks in mainland India.