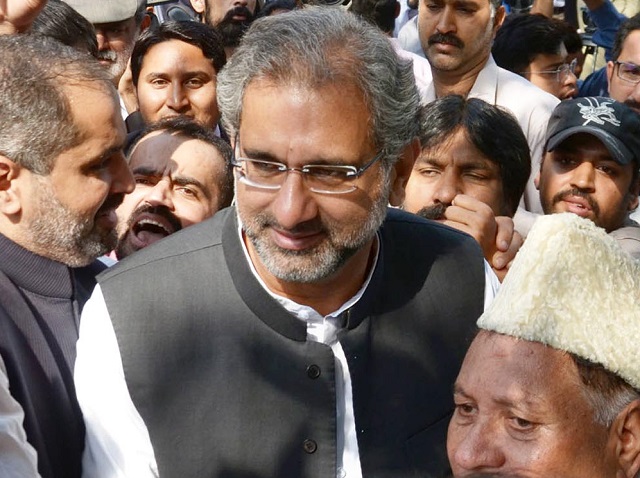 ISLAMABAD: Opposition lawmakers on Friday protested in front of the speaker’s dais and threw up torn copies of agenda after a federal minister criticised the former premier Nawaz Sharif whose statement about the 2008 Mumbai attacks was used by India to defend its stance in the Indian spy case.

Taking the floor, the PML-N leader Shahid Khaqan Abbasi earlier condemned arrest of Durani by NAB from Islamabad. He said the way speaker of a provincial assembly was taken into custody and the way his house was raided, pose a danger to democracy.

“Punjab Assembly Speaker [Pervaiz Elahi] also faces similar cases. The people of Sindh would ask why speaker Sindh Assembly was arrested but that of Punjab was spared,” he said.

Abbasi said the PML-N would be consistent about its position that persons holding constitutional posts should not be arrested in such a manner. He said production order of Saad Rafique was still not issued.

He said the house did not initiate a substantive debate in the last six months on issues being faced by the public. “People from my constituency came to me with inflated bills. The issue of inflated bills should be resolved. People are burdened with inflation and the economy is in dire straits.” Abbasi also apologised to Speaker Asad Qaiser for making a misstatement about him in a TV programme regarding NAB.

When the floor was given to Minister for Communications Murad Saeed, he lamented that the National Assembly should have sent a strong message to India as it was hurling threats at Pakistan but it was regretful that the opposition could not rise above its personal agenda.

He said the opposition did not talk about the dangers from the border of Afghanistan and other foreign policy challenges.  “A statement of Nawaz Sharif was being referred to by lawyer of India in the International Court of Justice and now the three-time prime minister is branded a traitor.”

Murad said on the diplomatic front, Pakistan’s improving relations should have been discussed in the house. He said Imran Khan took up the issue of prisoners in Saudi Arabia and now they are coming back to Pakistan and dignity of the country has increased manifold in the comity of nations.

He held the previous government responsible for the inflated gas bills, adding the circular debt had increased to Rs1,200 billion while the deficit of gas companies had went up to Rs150 billion.

Opposition member started shouting slogans against the government during his speech, gathered around the speaker’s dais and also tore copies of the agenda.  While Saeed’s speech was continuing, Naz Baloch of Pakistan Peoples Party pointed out the quorum.