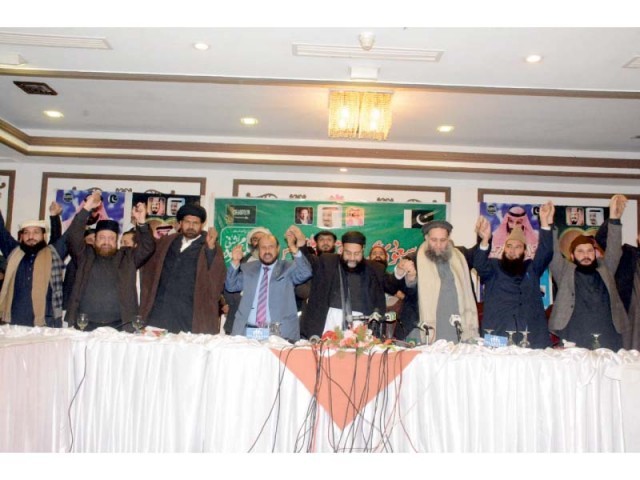 ISLAMABAD: With the unity of Muslim Ummah vulnerable to emerging challenges, Pakistan must play the role of a bridge to strengthen the bonds between Muslim countries.

This was stated by ulema during a seminar on Pakistan-Saudi Relations in Islamabad on Thursday. The seminar had been organised by the Pakistan Ulema Council (PUC) and was presided by the council’s chairman Hafiz Tahir Mehmood Ashrafi.

He added that Pakistan and the Kingdom of Saudi Arabia (KSA) are knotted in an eternal relationship of brotherhood and faith.

“KSA is committed to making a historic investment in Pakistan to uplift its economy, which is a demonstration of Saudi’s trust and confidence on the people and the government of Pakistan,” Maulana Qadri said.

He recalled that Prime Minister Imran Khan chose Riyadh as his first destination for an official foreign tour after taking office.

“History is witness to the fact that both Pakistan and KSA are time-tested friends. In every thick and thin, both the brother Islamic countries have assisted each other,” he stated.

Furthermore, he said that KSA has always been on forefront whenever Pakistan has called on it, either on the occasion of nuclear sanctions or economic mayhem.

He added that KSA and the United Arab Emirates (UAE) had supported Pakistan during the current economic crisis.

KSA’s investment in Pakistan will restore and reinforce the trust and confidence business communities the world over have in the country, he said.

The leadership of political and religious organizations speaking at the conference welcomed the state visit, stating that this visit will prove to be a historic milestone to strengthen Pak-Saudi Arabia relations in the longer run.

Participants of the seminar also underlined that the Muslim Ummah was resolved to confronting challenges faced by the Muslim world.

They added that Muslims from all over the world gathered and united in Harmain Al Sharifain keeping aside all distinctions, this unity is required to steer out the Muslim Ummah from prevailing challenges.

The participants of the seminar also lauded efforts of the ruling Pakistan Tehreek-e-Insaf (PTI) government for strengthening its ties with brotherly Muslim countries with the visit of Crown Prince Salman to further cement brotherly relations between Pakistan and KSA.

The massive Saudi investment in Pakistan will enhance opportunities for both Saudi and Pakistani merchants to boost bilateral trade between both the Muslim brother countries.

The participants of the seminar stated that Pakistan enjoys a respectable place amongst Muslim countries. Hence, it must play an effective role as a bridge for the unity of the Muslim Ummah.

Saudi Crown Prince Amir Muhammad bin Salman is scheduled to land in Pakistan later this week where he is expected to sign a series of agreements in different fields to uphold economic ties between the two countries.

The conference also underlined that in mosques across Pakistan, special prayers will be offered after the Friday sermons on February 15, regarding stability and peace in Pakistan and Saudi Arabia. The Friday congregations will also adopt resolutions to welcome Saudi Crown Prince Amir Muhammad bin Salman on his arrival in Pakistan.

Islamic finance must for economic development