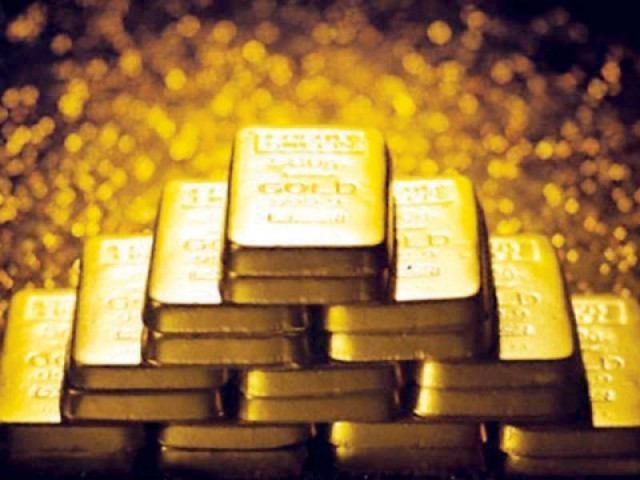 The precious metal crossed $1,300 an ounce on January 26 for the first time in the last nine months. PHOTO: FILE

KARACHI: Gold prices hit an all-time high at Rs68,150 per tola (11.66 grams) in Pakistan on Tuesday, following an uptick in the global market in the wake of US government crisis.

“Gold is moving on the higher side (in global markets) ahead of the end of a three-week deadline on Friday to end deadlock over the US funding bill and avoid a new phase of US government shutdown,” Rays Commodity Chief Operating Officer Adnan Agar told The Express Tribune.

Gold prices in Pakistan, which is a relatively smaller bullion market and largely relies on imports, are issued every day after taking into account factors like bullion prices in the world market, movement in US dollar in international and domestic markets and demand-supply of gold in the domestic market.

Accordingly, the gold prices increased Rs250 per tola to a record high of Rs68,150 in Pakistan, reported the All Sindh Saraf and Jewellers Association.

Earlier, the US endured the longest government shutdown for 35 days from December 22, 2018 to January 25, 2019 over non-approval of the US government-proposed funding bill by the Congress.

The precious metal crossed $1,300 an ounce on January 26 for the first time in the last nine months and hit the recent high of $1,323 on January 31. Prices of the imported commodity have been on the higher side for about a year in Pakistan, mainly due to 32% rupee depreciation in the last 14 months to Rs138.91 against the US dollar in the inter-bank market.

All Sindh Saraf and Jewellers Association President Haji Haroon Chand said the uptick in gold in domestic markets had made the precious metal significantly expensive. “Gold has gone beyond the purchasing power of the common man. A little demand seen in the country is mainly coming from gold investors,” he said.

Agar estimated that 60% of gold purchase in domestic markets was made by investors while the remaining demand came from the common man, who mostly bought gold ornaments for weddings.

He voiced hope that the US president and Congress would overcome their differences over the new funding bill and avoid a new round of government shutdown.

“The expected resolution (by Friday) may bring the bullion price down in world markets, and the trend will be followed in Pakistan as well,” he said, adding that gold may again move north by the end of February when the US was scheduled to report a dull GDP growth for the month.

“The US economy has survived a loss of $11 billion during the recent government shutdown,” he said.