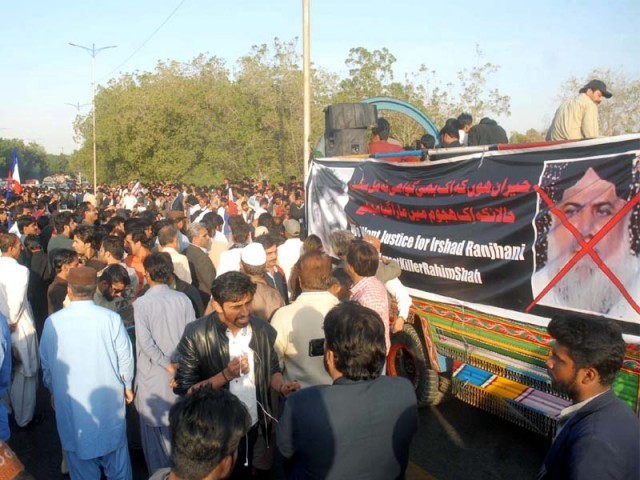 Members of Sindh Civil Society are holding protest demonstration against the killing of a local leader of a Sindh nationalist party Irshad Ranjhani at Shahra-e-Faisal road in Karachi on February 11, 2019. PHOTO: PPI

KARACHI / HYDERABAD: Hundreds of protesters, irrespective of their political or ethnic affiliation, converged on main Karsaz Road in Karachi to protest the brutal killing of Irshad Ranjhani, who was shot dead on February 6 by a local government representative in Bhains Colony.

The road echoed with slogans of “Justice for Irshaf Ranjhani”, as the protesters, buoyed by a social media movement that spread soon after a video of the incident surfaced, demanded the perpetrator be arrested.

The protesters comprised not just nationalist leaders and workers, but members of civil society organisations, rights activists, besides a large number of students, teachers and lawyers. “We need justice for Irshad Ranjhani,” came the shouts.

Slogans against the perpetrator, UC Nazim Rahim Shah and the police were inscribed on placards being waved by one of the largest crowds witnessed by the port city in recent past. “We are against ethnic riots. We only want justice for Irshad Ranjhani who was brutally murdered in our city and was deprived of medical help,” said Dr Shanila Shah, a practicing doctor, who participated in the event with her sister.

Rizwan Memon, who came from Lyari, said that instead of providing relief to the victim’s family and conducting a proper investigation, the police had started portraying Ranjhani as a ‘dacoit’. “Sindh government has ordered a judicial inquiry. How can they call him a robber before the findings of the inquiry committee,” he said, adding that the police department was siding with the corrupt local police, who were hand in glove with the UC Nazim.

Earlier, as the protest started at 3:30pm, some volunteers were deputed on Sharae Faisal to ensure the smooth flow of traffic. However, as the number of participants swelled, spreading over Karsaz as well as the road in front of Awami Markaz, it caused a traffic gridlock.

The sit-in continued till Pakistan Peoples Party (PPP) ministers Saeed Ghani and Syed Nasir Shah reached the site, with a message from the chief minister. On their arrival, the crowd became even more charged and started shouting slogans against the PPP government.

“No no, go go,” the crowd shouted. Some youngsters, who were leading the protest, requested the participants to stop and listen to the ministers, but the protesters became emotional.

Saeed Ghani, referring to the CM’s speech in the Sindh Assembly, said, “Irshad is not a dacoit. I assure you that a murder case will be registered against Rahim Shah and cops who are found negligent,” he said.

The crowd expressing concern over the statement of East Zone DIG, in which he had declared Ranjhani a dacoit and demanded to form another committee to investigate the murder. Negotiations between the protesters and the PPP ministers were ongoing till the filing of this report.

Other parts of Sindh

Meanwhile, the province-wide protests continued on Monday to condemn Ranjhani’s murder. The legal fraternity in Hyderabad boycotted the courts and held a demonstration.

Sindh High Court Bar Association Hyderabad demanded that the culprit who shot dead Ranjhani in broad daylight and that too in a public place should be arrested and booked in the FIR. “The bar has unanimously observed that due to inadequate, improper and bad governance of the state, innocent persons are being killed in public places.”

The lawyers deplored that the police have taken so long to arrest the killer even though video clips and images of the killings have widely spread on social media. “The people of Sindh are in a state of shock over the savage act of fatally shooting a person and then watching him succumb to the gunshot wounds as dozens of people who witnessed the crime stand as spectators,” lamented Advocate Abdul Raheem Chandio, who was among the protesting lawyers in Hyderabad.

The protesters said they will not accept any favour given to the suspect, Shah, during the inquiry by implicating the slain person in any fake case. They alleged that Shah represents a gang of criminals and is booked in criminal cases in around 15 police stations. The lawyers appealed the Chief Justice of Pakistan to take notice.

Ayaz Latif Palijo, general secretary of Grand Democratic Alliance, who earlier gave a call for strike across the province on February 14 over Ranjhani’s murder, said they will oppose any attempt to protect Shah or weaken the police case. According to Palijo, several nationalist parties, Jamaat-e-Islami, Jamiat-e-Ulema-e-Islam-Fazl, Sindh United Party and others have expressed support for the strike. He gave the call from the platform of Qaumi Awami Tehreek party which Palijo heads as its president.

Sindh Taraqi Pasand Party Chairman Dr Qadir Magsi after condoling with family of Ranjhani in Dadu district on Monday demanded that Shah and his associates should be arrested without further delay.

Meanwhile, the civil society’s representatives, students and political activists held protests in Badin, Thatta, Jamshoro, Sanghar, Tando Muhammad Khan and other districts. The faculty and students of Liaquat University of Medical and Health Sciences Jamshoro staged a protest in the varsity’s premises. Several district bar associations also held demonstrations. Protests were also held in several towns of Dadu district, which was the hometown of the slain person.

East Zone DIG said that they were in contact with Ranjhani’s family. A day earlier, the investigative team had examined the crime scene and recorded the statement of the Edhi ambulance driver. The investigation team had also reviewed CCTV footage and videos circulating on social media of the incident. A case has been registered against Shah for stopping people from shifting Ranjhani to a hospital after he shot him.

On February 6, Ranjhani was shot dead by Shah who also did not let people present on the spot take him to the hospital.