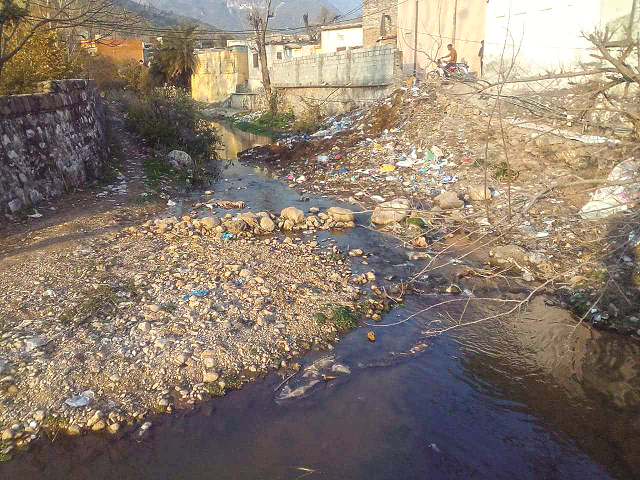 A stream in UC 2 Islamabad inundated with garbage and plastic bags pollutes the water flowing into Rawal Lake turning it into a breeding ground for mosquitoes creating the dengue virus. PHOTO: EXPRESS

Even though it is located close to the Bari Imam shrine — which is heavily frequented by devotees — and a stone’s throw from the Parliament House, the second union council of the federal capital is plagued with a host of civic and utility issues.

Resembling more the rural areas of the federal capital, Union Council-2 has a large number of cattle pens. Such is their density, that you can find one on every corner, giving the entire area the look of a cattle colony. While important economically, the presence of these cattle pens has hardly done any favours to the environment.

Owing to the absence of concerted cleanliness mechanisms, the solid waste generated from these pens is dumped untreated into the freshwater streams that pass through the area.

But that plan has been held up due to some technical issues and the presence of illegal settlements. Meanwhile, the dirty stream and the abundance of garbage has turned the area into a den for diseases, particularly mosquitos and in turn dengue infections. Last year, at least three confirmed cases of dengue were reported from this union council. This is worsened by the absence of decent health care options with not even a government-run dispensary in the UC. Residents are thus compelled to turn to private medical centres and clinics for even the most basic of healthcare assistance where they are overcharged.

With large quantities of raw solid waste dumped into streams and drains, they accumulate in the storm drains, choking them and causing them to overflow, especially during heavy rains in the monsoon season. The problem does not end there as the union council is among those areas of the federal capital which faces the brunt of load shedding during the hot summer months.

Like in other parts of the city, the deteriorating law and order situation has become a major issue with cases of robbery become a near-daily occurrence.

Residents of the area say they have lost their hard-earned possessions at regular intervals owing to rising street crime.

Residents say that despite numerous applications to either the Islamabad Metropolitan Corporation (IMC) mayor or the Capital Development Authority (CDA) chairman have failed to yield any concrete action on these issues.

The residents demanded that the government work to shift the cattle pens from the area apart from setting up sewage treatment plants to clean the waters of the natural streams in the area.

Further, they demanded that there should be a regular anti-mosquito spray across the area to protect the population from dengue fever. In this regard, staff should be hired permanently who are dedicated to fumigate various areas of the union council regularly.

Unless the government takes action, especially against hoarders who hike prices, the residents warned of staging a massive protest at Bari Imam Chowk.