Four out of eight plant specie­s that thrive­d in the delta have disapp­eared in recent years
By Z.Ali
Published: February 9, 2019
Tweet Email 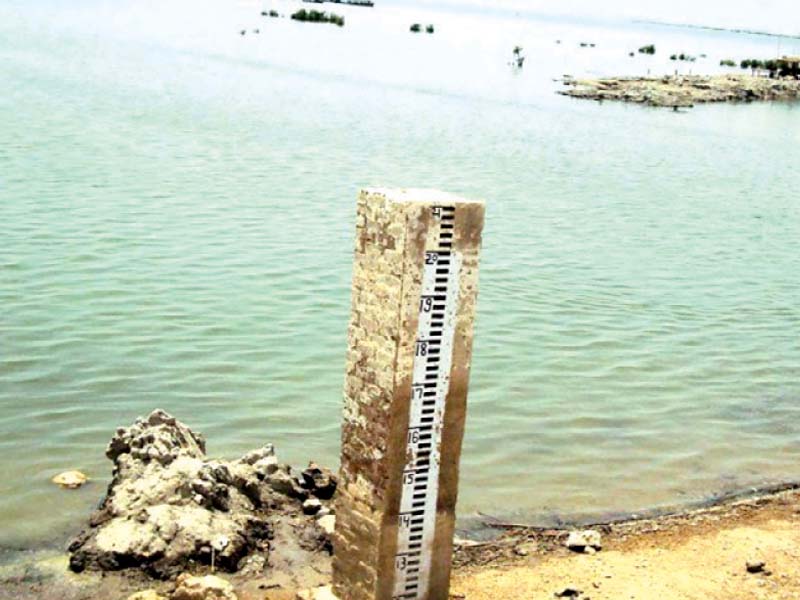 Manchhar Lake, one of the largest freshwater lakes in the world, has seen a rapid decline in water levels due to the decreased inflow. PHOTO: FILE

KARACHI: As the release of river water towards the sea remains at low ebb, the World Bank’s report titled ‘Pakistan, getting more from water’ has estimated the cost of degradation of the Indus Delta at over $2 billion per year. The 163-page report was launched at a ceremony in Karachi on Wednesday evening.

The report noted that the Indus delta, being the fifth largest in the world, featured rich biodiversity and valuable ecosystem services with productive fisheries and coastal storm protection by mangrove forests. The delta stretched to around 0.6 million hectares with over one third of it originally covered by mangrove forests. “However, reduced river flows and sediment loads and sea level rise are driving a multifaceted environmental crisis for the delta, including sea water intrusion, soil salinity, mangrove forest loss, reduced freshwater supply and depleted fisheries,” the report stated.

The delta was once fed by 17 freshwater channels but currently the water source has been reduced to just one. Moreover, for 138 days each year, the delta does not receive freshwater because the flows downstream of the Kotri Barrage have been limited to August and September. The situation allows the seawater to penetrate the delta for hundreds of kilometres during large part of the year. According to the report, “Sediment delivery to the delta is just 4% of pre-development [of barrages and canals in Pakistan] level.”

The delta’s degeneration has estimated to have affected around half a million lives. Furthermore, the shrimp production and catch of Palla fish have dropped by 90%. The mangrove cover has shrunken from around 0.24 million hectares to 0.10 million hectares, consequently affecting the biodiversity because they are an important winter habitat for migratory birds. The loss has also deprived the coastal areas from active barriers against tropical cyclones and storms and left them at greater risk of coastal erosion and flooding.

The report points out that the coastal Sindh districts including Badin, Sujawal, and Thatta are more vulnerable to seawater intrusion than coastal areas of Balochistan. Seawater has penetrated 30 to 50 kilometres inland in some coastal areas of Sindh.

The report predicts that the sea level rise and frequent and severe coastal storms will exacerbate seawater intrusion into the delta and the coastal groundwater. This will further degrade quality of subsoil water and the ecosystems and irrigation productivity which depend on it.

“During periods of greater water scarcity, the time spent for collecting water can rise by as much as 60% in rural Balochistan and 40% in rural Sindh.”

The heat waves, with temperatures exceeding 40 degrees Celsius for 10 consecutive days, are expected to become more frequent in Sindh, besides Punjab and Balochistan. The waves augment demand for urban water supply besides affecting energy security because the warmer water used for thermal plant cooling reduces power output by up to 0.5%. The crop water requirements and natural water losses through landscape evaporation will also increase.

The report finds that much of Sindh’s underground water is saline and, therefore, not a useful agricultural resource. The causes of salinity are both natural as well as poor irrigation management. It notes that average yields per hectare for the major food crops are 1.5 to 4.2 times below field potential and 2.1 to 5.6 times below international best practice.

“Water leaks from the canals and distributaries into the groundwater, and excess water applied to the fields flow to drains and thence to the river, or seeps to underlying aquifers”. The report underlines that leakage and drainage to fresh subsoil water supports groundwater pumping but the same to saline groundwater is non-recoverable for irrigation use. “Desalination of saline groundwater could potentially augment urban supply”.

Many drinking water supplies across Pakistan are contaminated by geogenic pollutants and industrial effluents. High concentration of arsenic, which is primarily geogenic in origin, in groundwater is widespread. Its prolonged exposure can cause skin lesions, cancer, and cardiovascular disease. The number of people drinking arsenic-contaminated water has not been verified.

The nutrients from fertilisers and pesticides in agricultural drainage, untreated municipal wastewater and industrial effluent are widely polluting freshwater ecosystems across Pakistan. Eutrophication, excessive presence of the nutrients, is affecting several water bodies like Manchhar Lake which used to be the largest lake in Pakistan. “Eutrophication leads to uncontrolled growth of algae and depleted oxygen levels in the water, killing fish and causing a major decline in biodiversity,” the report states.

According to the report, piped urban water supplies are not reliable. “Only 27% of the households receive water for more than six hours per day”. The water supply reliability is higher in Punjab, with 57%, in comparison to Sindh. “Low reliability reflects poor customer orientation by the water service providers”. The report observes that irregular services discourage the consumers from paying water bills and consequently affects the financial health of the service providers.

Over 1,000 children died and 22,000 were hospitalized with drought-related diseases in the Tharparkar district alone during the drought years from 2014 to 2017. Between 35% and 45% of Tharparkar’s families migrated to barrage areas in search of labour and grazing land for livestock in those years.

“Women are less likely than men to migrate individually in search of work or in response to water-related shocks,” the report identifies. “Heat stress appears to be a stronger predictor of migration in rural Pakistan than rainfall shocks.”

The report rates the irrigation service delivery as poor and less productive and the efficiency of water distribution very low and water delivery across the command areas inequitable. “Service tariffs are set too low and the operational costs of service providers are far too high.”

It attributes water-logging and salinization to poor operational performance of the irrigation system.

The economic return per unit of total water withdrawn from the surface and the subsoil is significantly higher in Punjab than in Sindh.

The causes of lower economic productivity in Sindh include water-logging and drainage, water losses and rice cultivation, which has higher evaporative losses compared to other crops, on a large part of agricultural land.

“Sindh’s drainage system is neither contiguous nor integrated and waterlogging is widespread due to high surface water delivery,” the report said. The saline drainage collected from around 2 million hectares by the Left Bank Outfall Drain (LBOD) moves from near the Punjab-Sindh border and discharges it in the Arabian Sea and in the Shakoor Lake at Pakistan-India border.

The inter-provincial water disputes of Punjab and Sindh preceded the creation of Pakistan. “Pre-partition ambitions of Punjab to divert water for irrigation were opposed by Sindh and in 1945 the British imposed a solution.” The British arrangement remained in place until 1970 when the federal government began allocating water on an ad hoc basis, creating the disputes.

Various commissions, subsequently, failed to reach agreement, until the four provinces agreed to the 1991 Water Apportionment Accord. The Accord shares a baseline volume of 144.749 billion cubic meters per year between the provinces. The accord lacks specific provisions for the industrial and urban water demands, according to the report.

“This is especially problematic for Sindh, given the size and rate of growth of Karachi and its importance to the national economy and the lack of viable alternative water supplies beyond limited groundwater and internal runoff”.