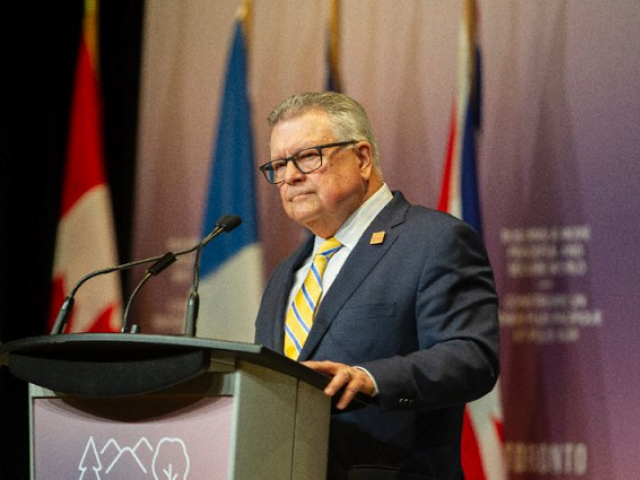 MONTREAL: A minor has been arrested in Canada and charged with two terrorism-related offenses, police said on Friday after the seizure of a suspected explosive.

Superintendent Peter Lambertucci of the Royal Canadian Mounted Police told reporters that Canadian investigators received in late December “credible FBI information regarding an attack plot with no specific time, date, or location affixed to it.”

There was never a threat to public safety, Lambertucci said, but the young suspect “was reported to be involved in the manufacturing of homemade and improvised explosive devices and that was one of the subjects of our investigation.”

During a search of two Kingston, Ontario homes early on Friday officers found a suspected “explosive substance” which was removed and later detonated, Lambertucci said.

The minor, whose identity is protected under Canadian law, was charged with knowingly facilitating a terrorist activity and counseling a person to deliver, place, discharge or detonate an explosive device with intent to cause death or serious bodily injury.

The RCMP also arrested a second suspect, an adult man, on Thursday night in Kingston, mid-way between Toronto and Montreal. He has not been charged and has to be released within 24 hours unless a formal criminal complaint is laid.

Canadian media reported that the two suspects knew each other.

Public broadcaster CBC named the adult arrested but not charged as 20-year-old Hussam Eddin Alzahabi, and reported that he was of Syrian descent.

Alzahabi’s parents arrived in Canada as refugees in 2017, after living in Kuwait for nearly a decade.

“They tell me they search about him about terrorists. I know my son, he didn’t think about that,” Alzahabi’s father Amin told the CBC.

The investigation involved about 300 personnel and various agencies including the US Federal Bureau of Investigation and Canadian Security Intelligence Service.

Prime Minister Justin Trudeau praised the police work and said Canada is among the safest nations on the planet.