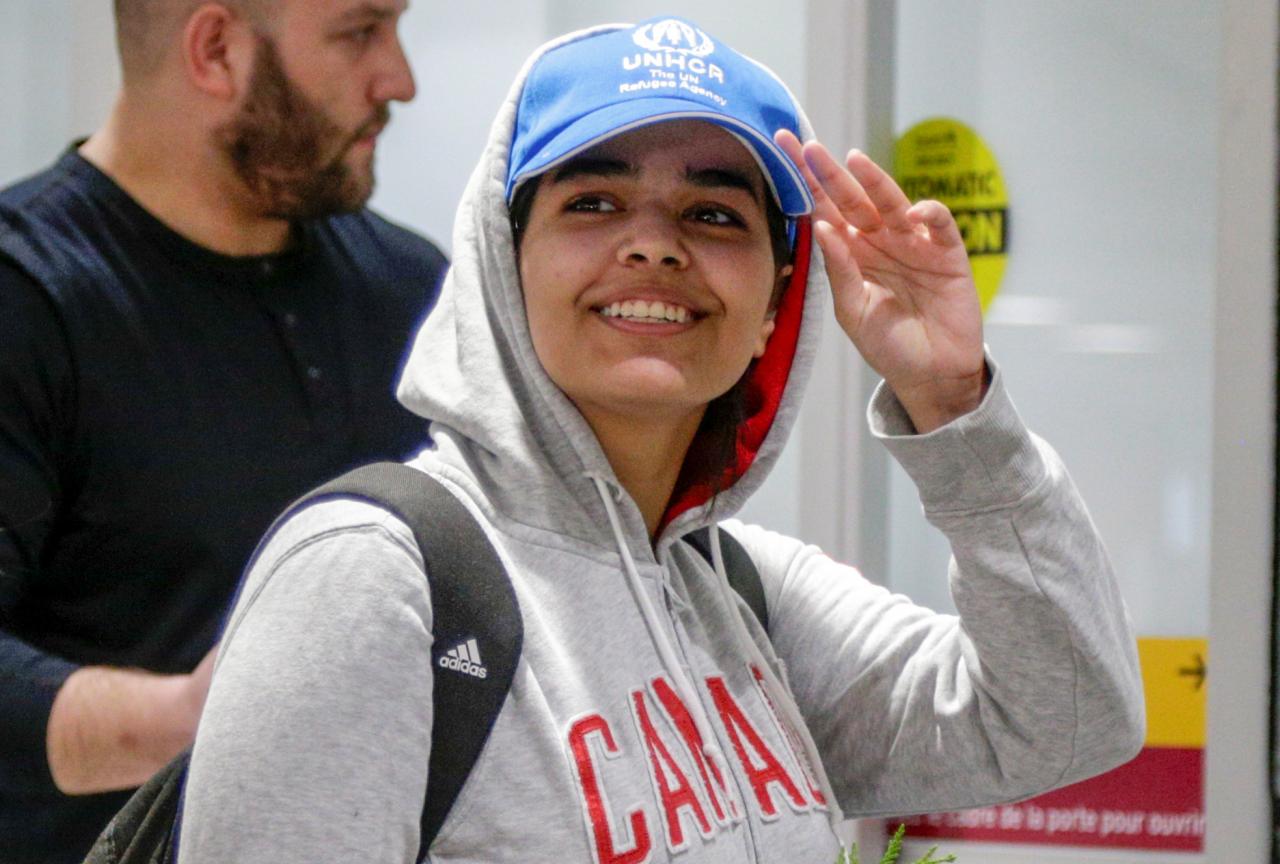 TORONTO: An 18-year-old Saudi woman who fled her family this week saying she feared for her life arrived in Toronto’s international airport on Saturday after Canada granted her asylum, where Foreign Minister Chrystia Freeland welcomed her as a brave new Canadian.

Rahaf Mohammed al-Qunun grabbed international attention this week after she barricaded herself in a Bangkok airport hotel room to resist being sent home to her family, which denies any abuse. Qunun refused to meet her father and brother, who arrived in Bangkok to try take her back to Saudi Arabia.

Qunun arrived at Toronto’s Pearson International Airport on Saturday morning, smiling and wearing a hoodie emblazoned with the word Canada in red, and a blue UNHCR cap.

Freeland, who received Qunun at the airport, told reporters that Qunun is “a very brave new Canadian.”

“Rahaf wanted Canadians to see that she has arrived at her new home,” Freeland told reporters. “But she had a very long and tiring journey and so would prefer not to take questions today. And she is now going to go to her new home.”

Qunun waved to reporters as she walked out into the international arrivals area but did not speak to the media. After a brief appearance, she was taken back into the airport terminal.

Qunun, who had initially intended to seek asylum in Australia, chose Canada instead because Australia took too long assessing whether to grant her asylum.

“(Australia) takes too long. That’s why I went to Canada,” she told Reuters in a direct message before boarding her flight to Toronto. Qunun took a Korean Air flight from Bangkok to Seoul on Friday and then a connecting flight to Toronto.

Her case has drawn global attention to Saudi Arabia’s strict social rules, including a requirement that women have the permission of a male “guardian” to travel, which rights groups say can trap women and girls as prisoners of abusive families.

Qunun arrived in Bangkok a week ago and was initially denied entry. But she soon started posting messages on Twitter from the transit area of Bangkok’s Suvarnabhumi airport saying she had “escaped Kuwait” and her life would be in danger if forced to return to Saudi Arabia.

Within hours, a campaign sprang up dubbed #SaveRahaf, spread on Twitter by a loose network of activists.

Following a 48-hour stand-off at Bangkok airport, some of it barricaded in a transit lounge hotel room, she was allowed to enter the country and has been processed as a refugee by the United Nations High Commissioner for Refugees (UNHCR).