Qawwali festival: Sufi expressions in the art of qawwali

Qawwali festival: Sufi expressions in the art of qawwali 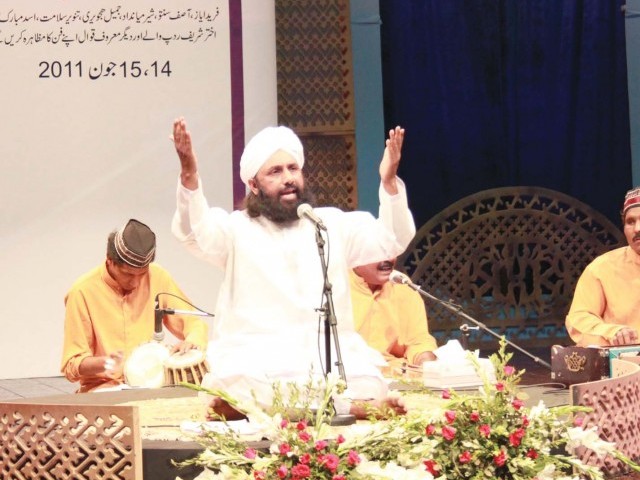 A participant performs during the two-day qawwali festival held at Pakistan National Council of the Arts. PHOTO: PRESS RELEASE

Renowned qawwals performed at a two-day qawwali festival at Pakistan National Council of the Arts (PNCA) that concluded here on Wednesday.

The qawwal parties lead by young qawwali maestros gave the message of love, peace and harmony through music.

PNCA Director General Tauqeer Nasir said that qawwals spread the message of Islam in the entire subcontinent. He added Islam is a religion of love and peace and has been misinterpreted by a particular segment of ill-wishers of Islam.

He said qawwali follows a specific process in which one starts with singing. In this psychological state the song is received in a manner that is not unlike standard forms of musical expression. The words are sung and then repeatedly with variations intended to bring out deeper meanings of the lyrics. After a while there is a repetition to the extent that the words cease to have a meaning, Nasir added.

Harmonium, tabla, dholak, sarangi, saringda, and rabab, are common instruments in qawwali, with a  simple clapping of the hands to support the singing being a popular motif.