In Lahore, during the rain, eight people suffer­ed injuri­es when the shade of a marria­ge hall collap­sed
By Our Correspondent
Published: January 24, 2019
Tweet Email 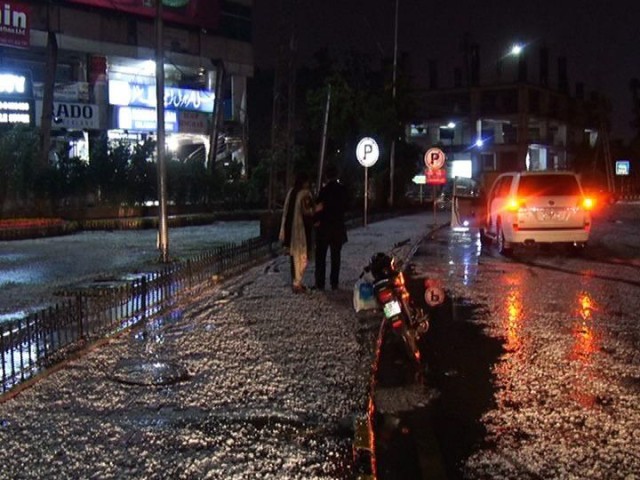 Heavy rain, accompanied by a hailstorm, came as a surprise to Lahoris on Tuesday night.

According to the Met office, the city experienced about 12mm of precipitation. Rainfall and hail brought a reprieve from the smog that plagues the city during the winter.

Residents of many areas, including Samanabad and Johar Town, were seen enjoying the rain and hailstorm.

In Lahore, eight people suffered injuries when the tent of a marriage hall collapsed near Doctors Hospital in Johar Town. According to rescue officials, the incident occurred when the wedding ceremony was about to end.

In Bahawalpur, heavy smog engulfed the whole of the region and disrupted routine life on Wednesday. The local met office said heavy smog has hit the regions, including Bahawalpur, Rahim Yar Khan, Bahawalnagar, Multan, Khanewal and other areas. It added that smog would continue for the next 48 hours. Due to smog, the weather has turned very cold, forcing people to stay indoors.

Traffic was thin on the roads and there was low attendance in offices and educational institutions. Due to gas loadshedding, difficulties of people have also been increased.