AFP fact check: No, food inflation has not risen to 20% in Pakistan

This online report by a private Pakistani broadcaster says: “20 per cent inflation on basic food basket has unfolded miserable consequences for public.”


The report says: “the ‘exponential’ increase in prices of basic kitchen items up to 20 percent has pulled severe consequences for the general public.”

The report does not give a source for its figures.

The report also says that the Pakistani government is set to propose a new budget on January 23, 2019, which it claims will impose new taxes on basic food items, which will likely cause further inflation.

The Pakistan Bureau of Statistics issued a report on inflation in December 2018.

Here is a screenshot of the table from the above report. AFP has marked the relevant months and figures. 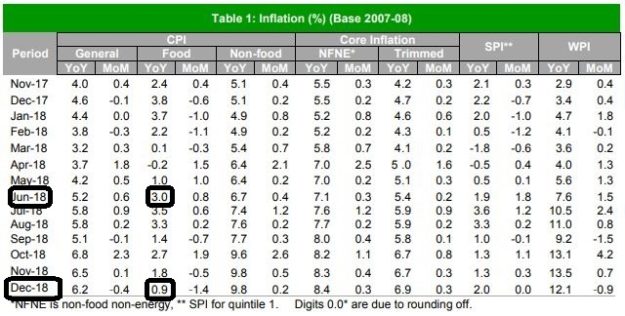 According to the Asian Development Bank, overall inflation was 3.9 perc ent in Pakistan in 2018.

The Pakistan Minister of State for Revenue Hammad Azhar tweeted that the story was fake and said that food inflation had declined in Pakistan.

Inflation slows down for 2nd straight month, stands at 6.2%

'Muslim middle powers can no longer be dictated by West’

The inescapable cycle of violence