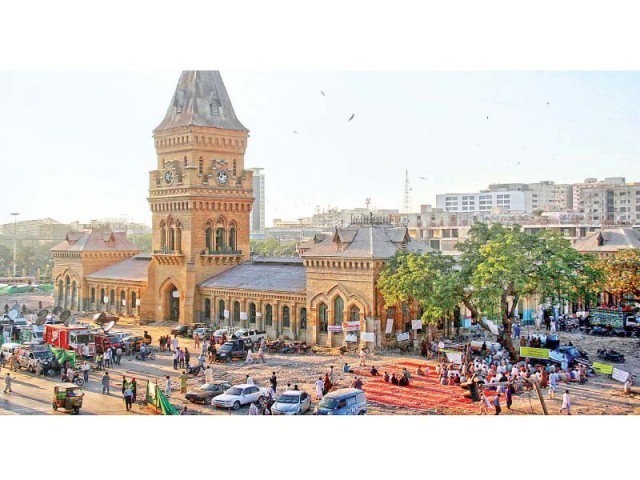 KARACHI: Sindh Chief Minister Syed Murad Ali Shah has ordered for the construction of roads and beautification of the areas cleared from encroachments around Empress Market and Karachi Zoo, declaring that he had a plan to make Saddar a pedestrian zone.

While presiding over a meeting to review progress of Karachi Mega project schemes and conceive new schemes for the next financial year on Tuesday, the CM also directed Local Government (LG) Minister Saeed Ghani to also prepare a plan for the rehabilitation of affected shopkeepers and traders and submit it to him for approval. “We will not leave any affected person unattended.”

The CM discussed the rehabilitation of the shopkeepers and small traders affected with the removal of encroachments from Saddar and Karachi Zoo. “I want to rehabilitate the affected shopkeepers immediately by giving them stalls on a temporary basis under a short-term arrangement and in the long-term, land would be identified for establishment of a market to accommodate them,” he said and issued directive for preparation of short-term and long-term plans.

Shah also proposed that night markets were in fashion all over the world and such markets could be started. “The vendors can be adjusted in the night market starting from 10pm to 3am in Saddar,” Karachi Commissioner Iftikhar Shallwani said. The chief minister directed him to prepare the night market proposal.

Shah directed the LG minister to make necessary arrangements for lifting debris of the demolished structures. “I have visited the Empress Market and noticed that the debris is still lying there which must be lifted,” he said, adding that the British era market would be restored to its original form by constructing a road around it and a small park, a sitting place and other such things. He directed LG Special Secretary Niaz Soomro and Karachi Package Project Director Khalid Masroor to start beautification work on the Empress Market and also directed to reconstruct the zoo walls that were demolished during removal of shops built along it.

For next year’s budget, Shah directed Planning and Development Department Chairperson Mohammad to prepare schemes for development of a park at Aram Bagh, construction of a tunnel like underpass between two-star hotels, Pearl Continental and Movenpick, and construction of a 50-foot lane for the traffic coming from Metropole hotel towards Marriot Hotel. He added that the tunnel between the two hotels would make the traffic flow smooth on the main road and there would be a proper market in the tunnel for shopping.

Reviewing the pace of different schemes launched under Karachi package, the CM directed the project director to expedite work on widening of bridge over Orangi Nala near Habib Bank for Rs1 billion, construction of roads surrounding Lee Market for which Rs649.1 million have already been allocated, re-construction of 8000 Road from Jam Sadiq Bridge to Dawood Chowrangi for Rs1.2 billion.

President denies any plans to impose governor’s rule in Sindh

He also directed Karachi commissioner to talk to army authorities for sparing land for construction of U-turn at Natha Khan bridge for which Rs214.466 million have been allocated.

The meeting also decided to identify more road sectors, drainage and other development schemes for Karachi in the next budget.