2009 assault: Verdict in GHQ attack case may be out soon

2009 assault: Verdict in GHQ attack case may be out soon 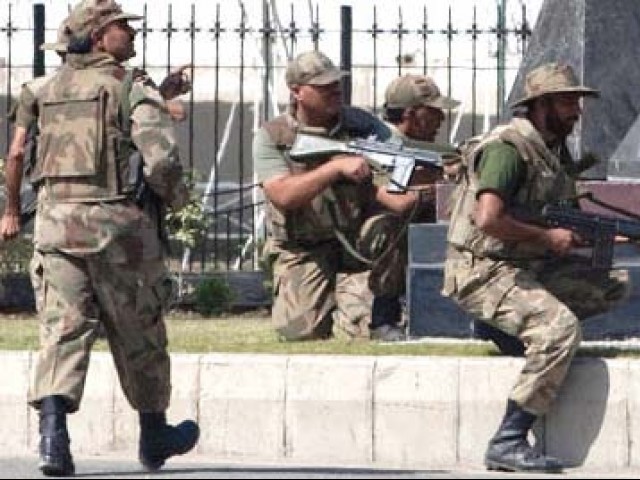 Militants forced their way into the main GHQ building after killing the soldiers guarding the main entrance. PHOTO: FILE

A military court has completed the court martial proceedings against 11 people for their alleged involvement in a brazen attack on the General Headquarters (GHQ) in Rawalpindi in 2009. And BBC Urdu quoted sources as saying that the verdict was likely to be announced any time.

According to the military laws, if convicted, the accused could face a maximum of death penalty.

The Field General Court Martial – headed by a brigadier – heard the case at an undisclosed location for five months. The suspects were given the right to defence. But their attorneys claim that their witnesses were either reluctant to appear before the military court or they just ‘disappeared’ before the hearing.

On October 10, 2009, heavily-armed militants, wearing suicide vests, mounted a brazen attack on the GHQ and held off army commandos for hours before the bloody drop scene of the siege.

The militants forced their way into the main building of the GHQ after killing the soldiers guarding the main entrance. They took several officials hostage before the final assault by the army commandos.

Nine of the attackers were killed in the operation while one was arrested after he was wounded. He was identified as Aqeel, aka Dr Usman. Eleven soldiers were also killed in the attack. Aqeel’s accomplices on trial are: Khaleeur Rehman, Usman Haka, Wajid Mehmood, Muhammad Adnan and Tahir Shafiq. Aqeel and one of the accomplices had retired from the Army Medical Corps.

According to the prosecution, the accomplices knew about Aqeel’s plans and had helped him carry out the attack on GHQ.

Inamur Rehman Advocate, member of the panels of lawyers representing the accused, said that neither he nor the families of the accused could comment on the trial before the judgment was handed down.

Together we rise: In a fragmented society, a harbinger of unity