Threat­en to block MA Jinnah Road on Monday if their demand­s are not met
By Our Correspondents
Published: January 6, 2019
Tweet Email 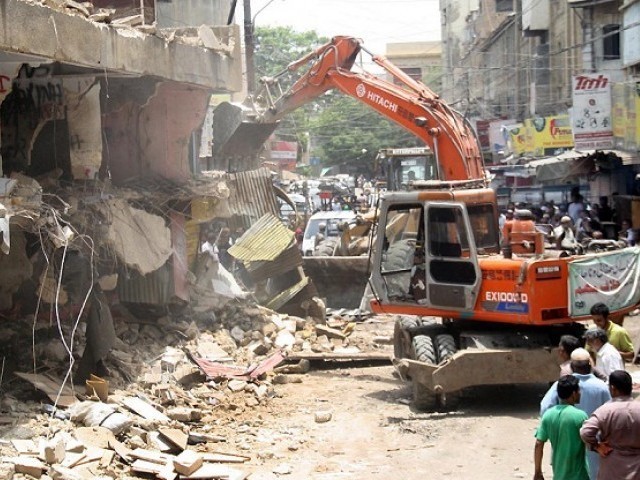 KARACHI: Shop owners in the city have given Sindh’s local government a 48-hour deadline to provide alternative spaces for the shops which have been marked for demolition. They have threatened to block MA Jinnah Road on Monday afternoon if their demand is not met.

Representatives of seven markets of the Karachi Metropolitan Corporation (KMC) gave the warning at a press conference on Saturday in response to the anti-encroachment notices issued by the KMC. Shopkeepers from Bahadur Shah Zafar Market, Aurangzeb Market, Tyre Market, Motorcycle Spare Parts Market, Urdu Bazar, Taj Mahal Market and Jubilee Market held a token protest on MA Jinnah road and warned that if the government did not withdraw the notice, they will block the road completely on Monday.

MA Jinnah Road is one of the city’s oldest and most crucial roads as it runs through the city all the way to the docks. If the road is blocked, thousands of citizens will be inconvenienced and businesses may also suffer.

“If Karachi Mayor Wasim Akhtar does not contact us by Monday 3pm, we will block the road,” said businessmen Faisal Khalil, who was flanked by Liaqat Shaikh, Adam Hussain and Muhammad Ahsan Gujjar.

KMC has sent notices to vacate the shops in the above-mentioned markets. The traders maintain that they have been running these shops for over 50 years and have been paying rent diligently.

“KMC is forcing us into unemployment and inflicting starvation on our families on the pretext of the anti-encroachment campaign,” said the businessman of the old city area.

They appealed to the Chief Justice of Pakistan, asking him to save their families from economic disaster. They said they their shops might be considered encroachments but they are registered and they have been regular rent and tax payers.

Anti-encroachment: Over 180 shops sealed in Quetta

Khalil said that the government should provide them with alternative space first and then it can proceed to demolish these 1,500 shops. The marked shops include 125 shops in Bahadur Shah Zafar Market, 167 in Aurangzeb Market, 110 in Urdu Bazar, 108 in Taj Mahal Market, 407 in Jubilee Market, and 120 in Akbar Road Motorcycle Market.

The traders are willing to vacate these shops but not without substitute arrangements as they have been in their respective businesses for decades and it would be impossible, they claim, for them to find alternative arrangements in the brief notice period they have been given.