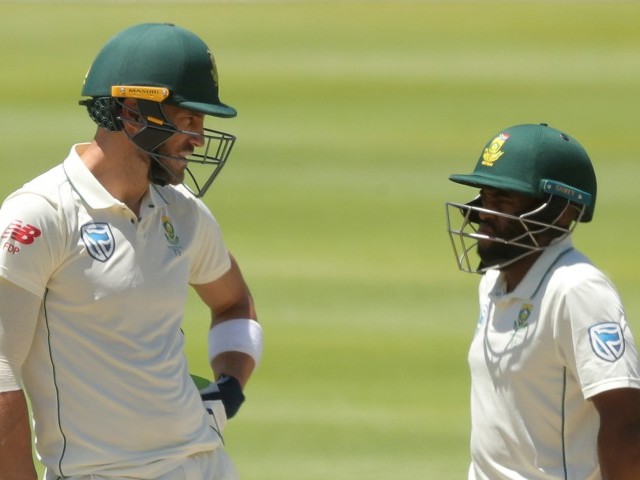 South Africa were 382-6 with a lead of 205 runs at stumps on the second day of the second Test against Pakistan at Newlands on Friday.

South African captain Du Plessis, out for a “pair” during South Africa’s six-wicket win in the first Test in Centurion scored a brilliant century (103)  — the highest score of the series. He struck 13 boundaries over the course of his innings.

Bavuma provided able support with an innings of 75 runs — an innings which included 10 boundaries.

The batsmen had to counter some accurate, hostile bowling before lunch when Pakistan took two wickets during the first hour and thought they had a third when Bavuma, on three, edged Mohammad Abbas to Azhar Ali at first slip.

The on-field umpires gave a “soft” signal of “out” but asked for television umpire Sunderam Ravi to check whether there had been a clean catch. He decided the ball had made contact with the ground while the catch was being taken.

Batting was not easy with several cracks widening on the pitch, including one on a good length outside the right-handers’ off stump, which probably contributed to the wickets of Aiden Markram off the last ball on Thursday and Hashim Amla in the second over on Friday.

Both Du Plessis and Bavuma batted cautiously before lifting the tempo during the afternoon.

For Pakistan, young pacer Shaheen Shah Afridi was the pick of the bowlers — claiming 3 wickets for 112 runs in 26 overs.

Mohammad Amir, Mohammad Abbas and Shan Masood only had one wicket to show for in their bowling figures, after a tough day in the field.

Leg-spinner Yasir Shah did not get much support from the pitch and remained wicketless throughout the day.

At close of play, wicketkeeper-batsman Quinton de Kock and Vernon Philander were unbeaten on 55 and 6 runs respectively.

South Africa are aiming to take an unassailable lead in the three-match series by winning the ongoing Test match, after having won the first Test in Centurion by six wickets.