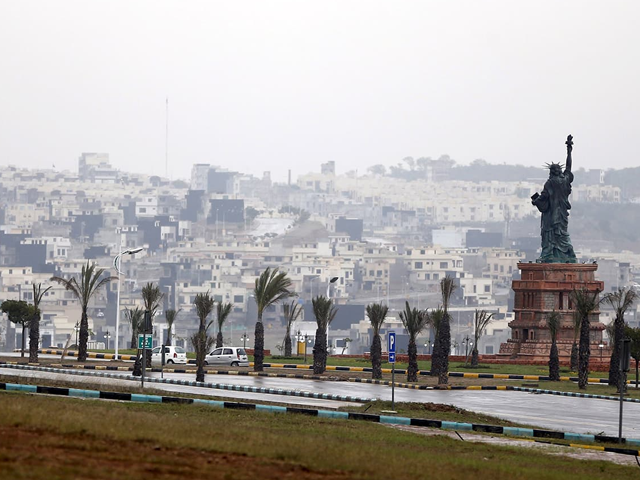 A replica of the Statue of Liberty stands on a hill overlooking the construction of new homes in Bahria Town on the outskirts of Islamabad. Photo: Reuters

RAWALPINDI: The Rawalpindi Development Authority (RDA) has directed housing societies within the district to get their layout plans approved from the civic agency or strict action will be initiated against them.

The authority is also planning to start action against societies who have violated their approved layout plans or have unilaterally changed the amenity plots reserved for mosques, playgrounds, schools, parks and car parks.

RDA Chairman Muhammad Arif Abbasi stated on Tuesday that 46 house housing schemes falling within the jurisdiction of RDA had been approved while 36 have been declared as illegal. The applications of another four are under process, he said.

He warned that strict action, in accordance with the law, will be taken against illegal housing schemes and the rules violators and that no one will be allowed to cheat the public.

Responding to a query, he elaborated that the authority was planning to take action against those housing societies which are using public utility areas for purposes other than what they were intended for.

Meanwhile, the citizens have urged the RDA to check violations of approved layout plans by private housing societies since many private housing schemes in the Rawalpindi district have created commercial structures on land meant for public amenities.

Saleem, a resident of a private housing scheme in Rawalpindi, told the media that many housing schemes, for which RDA had approved layout plans and issued no-objection certificates (NOC), have changed the layout plans on their own and have built  buildings on the plots meant for schools, parks, mosques, graveyards, community centres, hospitals, water reservoirs, community clubs and health centres.

Another resident, Tahir, said that several open spaces were converted into residential and commercial plots in violation of the layout plans approved by the authority.

Planning for streets and road network have also been changed in order to carve out more plots, he claimed.