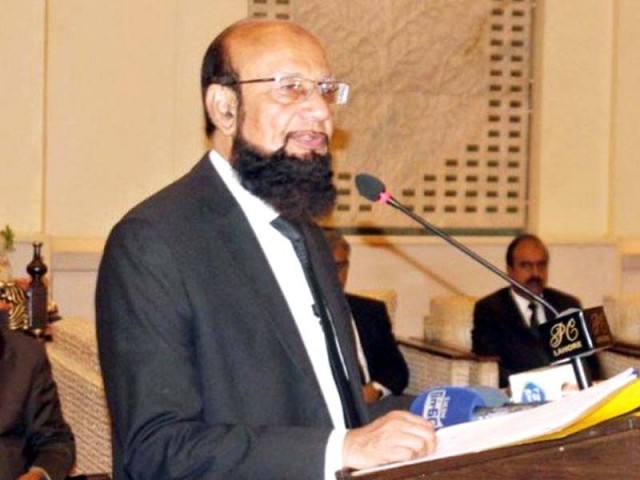 LAHORE: Justice Sardar Muhammad Shamim Khan took oath on Tuesday as the 48th chief justice of the Lahore High Court during a ceremony at the Governor House.

After assuming office, CJ Khan issued transfer and posting orders of district and sessions judges (D&SJs) of the province

Justice Haq was elevated to the LHC in March 2010 and took oath as the 47th chief justice on October 23, 2018. According to tradition, a full court reference was held on Monday to pay homage to the outgoing chief justice.

Chief justice-designate Sardar Muhammad Shamim, along with other LHC judges, law officers and senior lawyers, attended the reference. Addressing the participants, Justice Haq said he could have completed his nine-month tenure in a relaxed fashion, but he put all his efforts into providing justice for the poor.

“It will be an injustice if the bar’s cooperation with the bench is forgotten at this juncture. The bar has also played its vital role in providing maximum facilities to litigants,” he said.

Shedding light on his achievements, the former CJ said he laid the foundation of a ten-story admin block. He said letters were written to authorities for construction of the new block with at least 40 more courts.

The judge said judicial work in every district had been divided into civil, criminal and family categories. Evening courts had been set up to protect children from the traditional legal atmosphere and orders had been passed to entertain matters of special persons on a priority basis.

He hoped that the coming chief justice will continue the measures he had taken for providing maximum facilities to litigants. The CJ designate Justice Shamim also appraised Justice Haq’s ‘remarkable achievements’.

While numerous petitions were filed in Lahore High Court at the beginning of the year, 2019, a cop also sought directions for the Punjab Chief Minister Usman Buzdar to transfer him to Lahore from Quetta where the lives of his family were at risk.

Asad Abbas, a police official, named CM Punjab, Chief Secretary Punjab and Inspector General Police (IGP) as respondents. He contended in his petition that he is currently serving in the investigation department of Quetta police.

He submitted several applications to the Punjab CM for his transfer, but the effort bore no fruit. He prayed the court to direct the CM Punjab to transfer him from Quetta to Lahore.

Another petition was filed in LHC by a woman who sought an order for police officials to stop harassing her after she married on her own free will. Farzana Bibi submitted in her petition that Inspector General Police (IGP) be ordered to pass instructions to his force to not harass her based on the directions of her parents. She stated that no FIR had been registered anywhere against her and her husband. Regardless, officials were harassing her after she married one Mansab Ali on her own will.