“[I identify with] Nur Jehan, the Empress”

“[I identify with] Nur Jehan, the Empress”

What is your idea of perfec­t happin­ess? A big bowl of sweet potato fries, a Diet Coke and pointl­ess TV to...
By Mehreen Jabbar
Published: June 6, 2010
Tweet Email 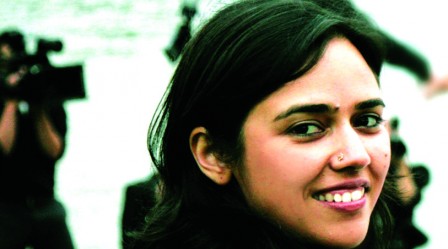 Acclaimed filmmaker Mehreen Jabbar indulges in overpriced popcorn, fetes herself when she makes it to the gym and finds deplore to be a rather harsh term.

What is your idea of perfect happiness?

A big bowl of sweet potato fries, a Diet Coke and pointless TV to watch.

What is your greatest fear?

What is the trait you most deplore in yourself?

Isn’t ‘deplore’ a rather harsh term?

What is the trait you most deplore in others?

What is your greatest extravagance?

Buying overpriced and unhealthy buckets of popcorn at movie theatres.

What is your current state of mind?

Sailing on a calm ocean, with occasional turbulence.

On what occasion do you lie?

When I am feeling too lazy to explain the truth.

What do you most dislike about your appearance?

Which living person do you most despise?

The several hate and war mongers scattered around the world.

What is the quality you most like in a man?

What is the quality you most like in a woman?

Which words or phrases do you most overuse?

“Really” in both question and the exclamation form. ‘That’s amazing’, ‘Haan jee’, and ‘Nahin yaar’.

When and where were you happiest?

Many times over the years, but now specially.

To play an instrument.

If you could change one thing about yourself, what would it be?

To be more proactive.

What do you consider your greatest achievement?

The days I can drag myself to the gym.

If you were to die and come back as a person or a thing, what would it be?

One of the migrating birds so I can travel for free.

What is your most treasured possession?

An autograph book from the early 20th century belonging to my grandmother.

If you didn’t do your current job, what would you choose to do?

Something to do with music.

What is your most marked characteristic?

My teeth and my hand wringing. And having a ready smile.

Which historical figure do you most identify with?

Who are your heroes in real life?

All who go beyond themselves and help others.

What is your greatest regret?

Get in touch with me later for an article on that.

“Come grow old with me, the best is yet to be”.

How many hours of loadshedding did you experience yesterday?