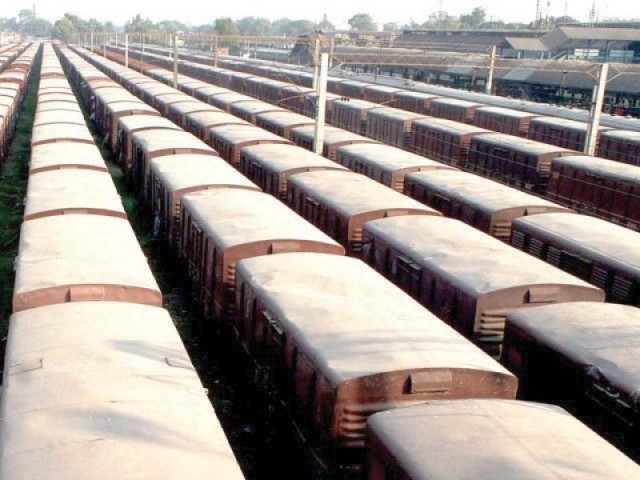 The railways may hand over all cargo trains to the business community for transporting import and export goods from Karachi to upcountry dry ports. PHOTO: FILE

KARACHI: Pakistan Railways, in collaboration with China, has planned to lay a high-speed double track from Karachi to Peshawar but it has yet to finalise the mode of financing for the project which will cost billions of rupees, said the railways minister on Tuesday.

“We, along with China, will lay a double track from Karachi to Peshawar with minimum speed of 160 (kilometres per hour) and maximum of 260 if and when we get the go-ahead from the government,” said Sheikh Rasheed Ahmed.

He was speaking to media at the Karachi Cantt Station after seeing off the first scheduled cargo train under public-private partnership on the Karachi-Lahore route. He was accompanied by Sindh Governor Imran Ismail.

He said Prime Minister Imran Khan would soon announce his decision on the source of financing for the Karachi-Peshawar high-speed rail project – whether it would be an investment, loan, build, operate and transfer mechanism, public-private partnership or joint venture.

“The decision is to be taken by the prime minister and this will be decided before March 23 so that work can be kick-started,” the minister revealed, adding old railway tracks, which would be replaced by new ones, would be utilised for other routes later.

“As we are laying a railway track network across the country, the increase in train fares has become inevitable,” he remarked. He blamed previous rulers for the increase in fares as corruption on their part had caused price hikes and inflation.

He also announced that employees of Pakistan Railways would be promoted on the basis of grades.4

“KCR has moved into CPEC. Our decision will be announced in five to 15 days,” he said. “If the KCR project is not initiated today, it will never be completed.”

He urged the business community to play its role in steering Pakistan Railways out of the financial crisis because the economy could not grow until wheels of trains were not in motion.

He suggested to them to pay in advance or arrange bank guarantee worth Rs50 billion for Pakistan Railways to help it recover from steep losses. Against the assistance, the railways would hand over all cargo trains to them for transporting import and export goods from Karachi to upcountry dry ports.

At present, around 35 freight engines and dozens of wagons are lying in the parking yard of the railways. Cargo movement via trains cuts freight charges by a minimum of 20% compared to roads while transportation time comes down to two days from Karachi to Lahore compared to three days via roads.

The prime minister has given instructions for overcoming losses of Rs32 billion this year. “The railways owes Rs25 billion in loans, pays wages worth Rs30 billion and spends Rs18 billion on fuel. Losses can be overcome in partnership with the private sector,” he said. “I wish no railway track is left free for even one hour.”

He praised the Marine Group of Companies for its efforts to run the first scheduled cargo train under public-private partnership on the Karachi-Lahore route. “This has boosted the Railways’ morale and confidence,” he said.

Under the new service, they will run five cargo trains a week initially. The number of trains will be doubled to 10 by the end of next month (January 25). Later, a maximum of 20 trains will be run in a week in March.

The key to success of the new service will be its punctuality, accuracy and pre-defined timings for departure and arrival.

“It doesn’t matter whether the train is fully booked, half or empty, it will leave for its next destination on time. We have given freight guarantee (of Rs2.4 million per train) to Pakistan Railways,” he said.

Each cargo train would have a capacity of carrying 75-80 containers of 20 feet each.

Initially, the train will run between Karachi (Karachi Port and Port Qasim) and Lahore (Prem Nagar Dry Port) and will later make a stopover at dry ports in Sialkot, Multan and Faisalabad.