'I was gripped by fear and joy', tourist tells tale of walking on G-B's frozen lake

'I was gripped by fear and joy', tourist tells tale of walking on G-B's frozen lake

Nizam Ahmad narrat­es his maiden trip to the pictur­esque valley in the winter­
By Shabbir Mir
Published: December 24, 2018
Tweet Email 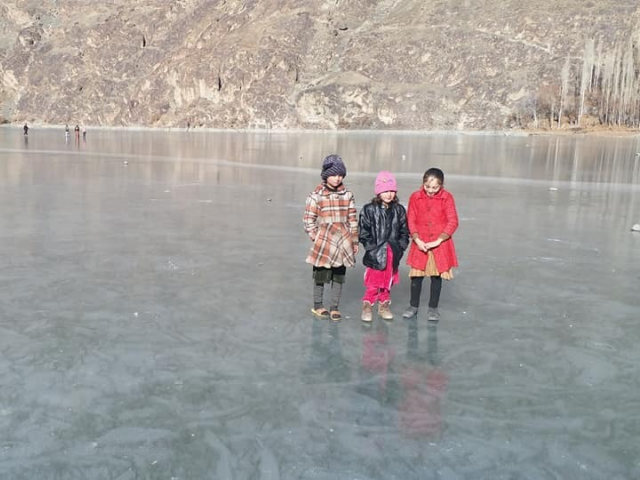 Children stand on a frozen lake near Gilgit Baltistan

GILGIT BALTISTAN: This wasn’t the first time Nizam Ahmad was visiting Gilgit-Baltistan, but this was his maiden trip in the winter season to the picturesque region.

The 37-year-old tourist from Multan plans to venture into every valley of Gilgit he can take his vehicle to.

While temperatures have dropped as low as -15 degree Celsius in some areas, snowfall has blanketed only high altitude areas including parts of Astore, Skardu and Gojal valleys.

The Ghizer valley came first on Ahmad’s itinerary. This week, as he passed through the valley, Ahmad noticed a festivity going on alongside the main road.

Though the activity was not unusual itself, he decided to go closer to observe what the commotion was about.

Constitutional rights to be extended to people of Gilgit-Baltistan

A soon as his feet touched the ground after dismounting his vehicle, he dimly realised that he was walking on a sheath of ice. Fear gripped him.

“Oh my God, I can’t believe this is ice,” he exclaimed. “Is this ice strong enough to bear the weight of all the people dancing and playing over it,” he wondered to himself aloud.

The spot Ahmad stood on was a part of the Khalti Lake, situated in the Gupis Valley of Ghizer district, and located about 120 kilometres from Gilgit. At 7,000 feet, the lake is said to be 30 to 70 feet deep.

As Ahmed attempted to go deeper into the crowd, he saw people doing different things in groups. “My fear evaporated as I joined other people. Some were dancing and others were playing,” Ahmed recounted his experience.

The frozen surfaces serves as a playground for locally-held dance shows and sporting events. Khalti freezes over in December and remains in its frozen state till January, allowing locals an opportunity to hang out and play sports in an otherwise entertainment-strapped region.

Scores of young people from other areas of Gilgit also visited the lake for photography. “Awesome! It’s simply awesome,” remarked another tourist from Gilgit. “Its risky business but is also thrilling.”

While the peaceful atmosphere is a motivation, the crippling cold coupled with the absence of facilities keeps all but the very daring away during winter. When winter ends and the temperature rises slightly, the area becomes picturesque and looks like an ideal retreat. The fresh water from the lake opens up the breathtaking beauty of the lake.

However, the lack of tourist facilities means that few put Khalti lake on their next holiday destination, regardless of the season.