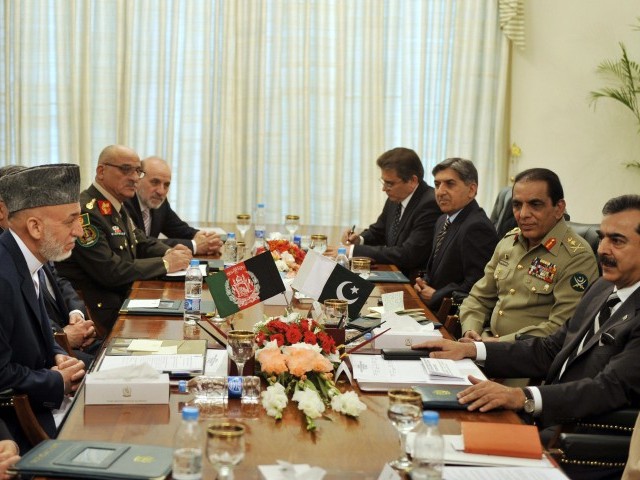 ISLAMABAD: Afghan President Hamid Karzai on Saturday promised to look into the cross border attacks on Pakistani forces in recent days, saying it was Kabul’s responsibility to ensure that such incidents do not occur.

He said this while addressing a joint press conference with Prime Minister Yousaf Raza Gilani after bilateral talks between the both countries.

Karzai said that such attacks highlighted the need for both countries to work together in denying sanctuaries to terrorists. He also called upon Pakistan to check militant infiltration into Afghanistan.

Asked about US withdrawal, Karzai said 2014 was the date of transition when Afghan forces would take over security. He added that whether or not the US would maintain some troops after 2014 depends on  the strategic partnership between the US and Afghanistan but the issue had not been finalised.

Speaking on the occasion, Gilani offered support for the Afghan-led reconciliation process. He said that the joint commission would be meeting regularly to discuss the issue.

The prime minister also said the two countries had highlighted development projects like Peshawar-Jalalabad railway and a road link to connect Peshawar, Jalalabad and Heart.

Earlier, the interior minister of Pakistan and Afghanistan agreed to deploy a joint task force against militants’ infiltration on the Pak-Afghan border within three weeks.

The decision was taken during a meeting between the interior interior ministers of both countries in Islamabad. Both the minsters also agreed on intelligence sharing on the Pak-Afghan border.

Speaking on the occasion, Interior Minister Rehman Mailk said a biometric system will be installed on the borders within three weeks.

He said a joint mechanism will be devised for granting immunity in diplomatic visa.

Malik said that talks between different factions of Taliban and establishing Pak-Afghan commission are positive developments.

Meanwhile, a joint declaration to improve economic ties and cooperation for security in the region has also been signed by the foreign ministers.

Commission for reconciliation and peace

Karzai and Pakistani Prime Minister Yousuf Raza Gilani led the first meeting of a joint commission for reconciliation and peace, pledging that the body would meet again in Kabul but without announcing a date.They committed to an Afghan-led process of reconciliation and peace, and called for the support of all Afghanistan’s international allies, the Pakistani foreign ministry said.

Both sides committed to work “closely together” for reconciliation and peace in a “holistic and comprehensive manner”, and to intensify intelligence and military cooperation, it added.”

We are fighting our own war,” Zardari told reporters with Karzai on Friday.”We support the people and the government of Afghanistan. We support them. We cannot expect peace in the region without peace in Afghanistan,” he added.

Karzai said the relationship between the “twin” countries had improved. “The struggle (to fight terror) is the struggle of all and the victory will be in the interests of all,” he said.

Karzai set up the council last year to seek talks with the Taliban in return for them laying down their arms and accepting the constitution.