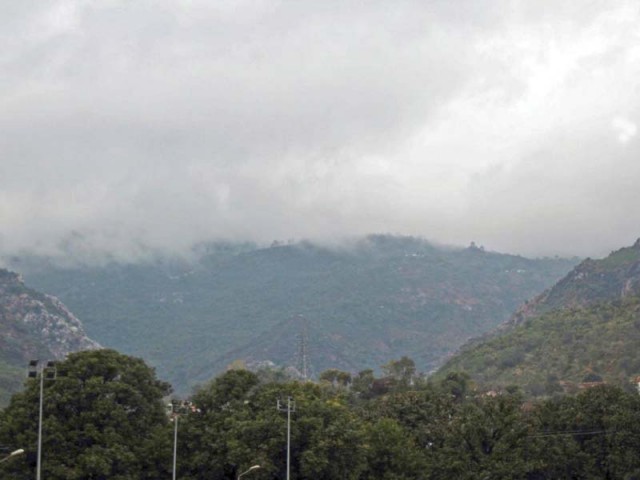 A view of motorists on Islamabad highway after a heavy rainfall. PHOTO: APP

ISLAMABAD / RAWALPINDI: The first shower of the winter in the twin cities of Islamabad and Rawalpindi helped add a bit more bite to the cold winter air and also helped dissipate the smog which had surrounded some areas.

The latest rain spell, which started with intermittent showers late on Sunday evening, was not as heavy as the two cities have seen in the past with the Pakistan Meteorological Office noting that a westerly wave affecting the upper and central parts of the country caused around 14 millimetres of rain in Rawalpindi and 11 millimetres of rain in Chakwal.

But it was enough to see some low-lying areas of the two cities face some inundation, including on key thoroughfares in the cantonment areas, affecting the flow of traffic.

The water level in the massive storm drain, Nullah Leh, also rose by five feet at Katarian. It rose by three feet at Gawalmandi.

Attendance in schools, offices and in the district courts remained low.

The sale of winter delights particularly fried food items such as fried fish and fritters saw a spike in their sales on Monday along with the sale of dry fruit and soups with considerable rush seen at their outlets and stalls on Monday.

The rains affected the five-day anti-polio drive which started on Monday.

Chaudhary Muhammad Hussain, the in charge of the anti-polio drive in Rawalpindi, said that their campaign had been disturbed owing to the intermittent showers in the district.

He said that the door-to-door polio vaccination campaign remained suspended on Monday and only those children, who had made it to their educational institutes including schools and madrassas, could be vaccinated on Monday. Those arriving at transit points were also vaccinated. 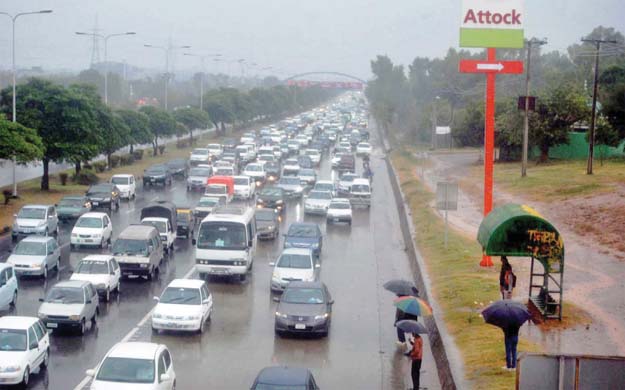 Hussain said that as soon as the weather stabilises, the campaign will resume normally. He added that they could extend the campaign for a day in order to meet their vaccination target of 850,250 children who are five-years-old or younger.

He dilated that as many as 2,787 polio teams including 2,333 mobile teams, teams at 287 fixed points,119 transit points,221 Union council medical officers and 496 area in-charges are participating in the vaccination drive.

The drive supervisor said that staff deployed for the campaign has been instructed that no negligence would be tolerated.

Hussain urged parents to come forward and play their role to ensure that their children are vaccinated to eliminate the disease.

Meanwhile, District Health Authority Chief Executive Officer Dr Khalid Mehmood said that they were focusing on those parents who have previously refused to allow their children to be vaccinated.

Like in other parts of the country, the rain has also helped dissipate the smog in the twin cities. The smog had been causing health hazards among citizens apart from causing inconvenience while travelling.

However, the rain has increased the chances of people constricting cold and flu. 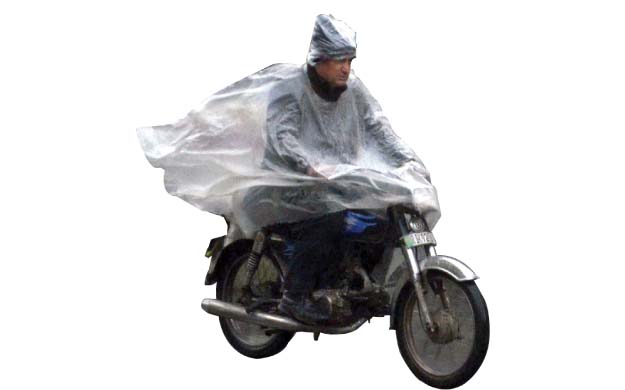 Doctors said that they have treated more than 100 patients suffering from cold. Dr Sobia Zia told a private news channel that patients with flu, cough and cold will see some relief in symptoms after rains and that people will be able to breathe better once the dust settles.

“People should take a lot of liquids during the winter,” she advised.

Dr Ahmed said that burning of garbage on roads, factories emitting smoke and smoky vehicle were the main causes of smog.

He said that smog may affect the human health during the start of winter season due to the change of climate and environmental pollution.

Hence, the He promotion of tree plantation was vital for avoiding smog and checking environmental pollution.

With water standing in some low-lying areas, the Rawalpindi Waste Management Company (RWMC) on Monday cleaned the nullahs and choked drains.

Additional sanitary workers were deployed to ensure cleanliness in several areas of the.

According to an RWMC spokesperson, the RWMC Managing Director Dr Rizwan Ali Sher Dil visited different city areas of the city, particularly the low-lying areas, to check sanitation arrangements and directed the officers to focus their efforts on areas near the nullahs.

He further instructed officials to ensure cleanliness in areas where some sanitation related problems had been pointed out.

To ease the flow of water, the RWMC spokesperson said that they had completed a cleanliness operation and dredging of major drains to avoid any flood-like situation.

He urged citizens not to throw garbage and plastic bags in drains which can cause obstructions.

Owing to the strong winds accompanying the rains, a number of areas in Rawalpindi were left without any power.

Many parts of the city and cantonment did not have power from 11pm on Sunday evening until 4pm the following day.

The gas pressure in areas where gas is piped was said to have dropped owing to the cold.

Residents of some areas said that piped gas supply all but disappeared early in the morning from 6am to noon and then from 6pm to 1am.

Those who use gas cylinders said that prices had increased by Rs20 per kilogramme.

The poor weather meant that a number of flights were cancelled —which were supposed to either depart from or arrive at the New Islamabad International Airport in Fateh Jhang.

Officials said that as many as 14 international and domestic flights were cancelled. These included flights to Gilgit PK-605 and PK-607. Flights to Skardu PK-451, Bahawalpur PK-670.

Others affected included a PA-212 to Sharjah, flight from Riyadh PA-275, flight to Mashad Y-6077. The Karachi-bound PK-373 departed after a delay.

A number of outdoor sporting events were also affected including the main round matches of the Begum Kulsum Saifullah Khan ITF Futures (F-2) Tennis Tournament 2018.