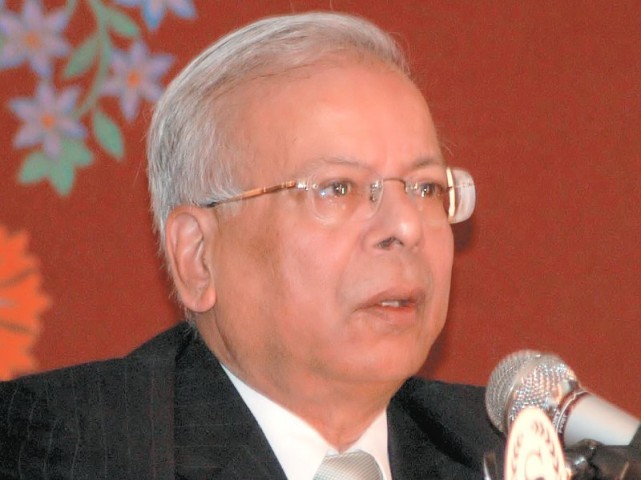 Prime Minister’s Adviser for Institutional Reforms and Austerity Ishrat Husain has said both India and Pakistan have the trade potential of $37 billion which, if unlocked, could prove a powerful engine for shared prosperity and to reduce inequalities in the region.

“We need to invest in science and technology to tap potential of fourth industrial revolution, otherwise, we will lag behind,” he suggested, adding the challenge today is to invest in labour productivity in services and agriculture sector.

“Inequalities, such as gender, income, and social, coupled with poverty are hindering development and growth of regional countries,” said Husain stressing the need for improving quality of education in Pakistan so as to create job opportunities.

Also speaking at the conference, former interior minister and Member of the National Assembly Ahsan Iqbal said, “We are passing through the age of digital revolution where artificial intelligence is reshaping the future of this world.”

“At the moment, when inequality is growing at an alarming level, we have to ensure every single person of the society has access to information and communication technology to fight inequalities,” said the Pakistan Muslim League-Nawaz (PML-N) senior leader urging to not be myopic but to adapt to changes.

He said the China-Pakistan Economic Corridor (CPEC) will impact the lives of most vulnerable people and to further harness the potential of regional connectivity, we need stronger connections on trade, culture and technologies among regional countries.

Meanwhile, Pakistan Peoples Party (PPP) Senator Sherry Rehman said peace within and peace without should be our objective while moving towards regional cooperation and connectivity, which would help Pakistan and other countries of the region to grow and develop.

“India and Pakistan have no option but to talk on all unresolved issues including Kashmir,” she said adding that there is consensus among all the political parties in Pakistan to have peace talks with India.

“We have history of starting and stopping talks, and walk-out from peace talks would not help any country,” said Rehman adding visa free corridors like Kartarpur Corridor can help bring peace in the region despite political differences.

Executive Director SDPI Dr Abid Qaiyum Suleri said during the four-day long event around 40 different session were organised, where issues such as trade, peace, climate change, poverty, left politics, SDGs, health, education, fiscal decentralisation, charter of economy, agriculture and role of media were discussed in detail.  He also called upon the political parties to reduce the political tensions and evolve consensus on issue of public interest.

Earlier, speaking at a session titled: Fiscal Decentralisation: Gaps and Challenges, former finance minister Dr Hafiz A Pasha stressed the need for showing political maturity saying that is what “we all require as a nation”. He added that federal front needs to have high degree of rationalisation for fiscal decentralisation.

Similarly, speaking at a concurrent session titled: Rightsising the Health Warning Tobacco Control Initiative Senator Mian Muhammad Ateeq Sheikh said, “While making policies we forget we need to take on board the real stakeholders; in this case the tobacco producers should implement laws regarding limited use of tobacco in the country.”

He argued the newly-levied ‘sin tax’ has caused a lot of social backlash and he is personally of the opinion that in Pakistan the main hurdle has been ineffectiveness to implement policies because of the strong position these entities hold because of the leverage they get by paying heavy taxes.

“Pakistan is facing huge energy leakages due to various reasons,” he said adding the government is carrying out a massive crackdown on theft and non-recovery.

Meanwhile, Chairman of Higher Education Commission Dr Tariq Banuri, stressed the need for introducing a rural support programme approach in the education system to bridge the gap between academic research and field communities.

Speaking at a concurrent session titled: Role of Private Sector in Climate Action, former federal minister Nisar A Memon discussed harmful human impacts on climate as he focused on bringing awareness in the society which would lead to better socioeconomic conditions of the country.