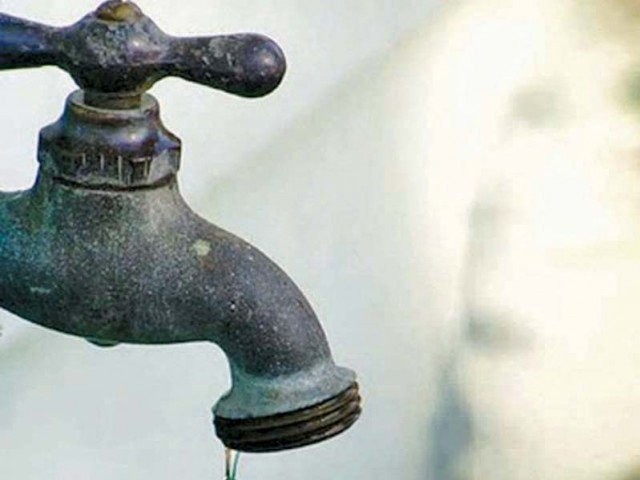 KARACHI: The water crisis in Karachi seems to be getting worse day by day with no immediate solution in sight. Currently the city requires 1,100 million gallons of water per day (MGD) and faces a shortage of 700MGD.

The city has two sources of water supply, Hub Dam and Keenjhar Lake. Of these, the supply from Hub Dam, of 100MGD, has come to complete halt as the dam stands empty due to the lack of rainfall in Karachi in the last three years. Hub Dam primarily supplied water to district West. Now, the city depends on the water Keenjhar Lake that is distributed via Dhabeji pumping station. The Dhabeji pumping station supplies 450MGD, but by the time it reaches the city it is reduced to 400MGD as it is either stolen or lost in leakages. Various areas that were earlier supplied water every 15 to 20 days, now do not receive water for more than a month.

Residents feel that federal and Sindh governments are not serious about resolving the crisis.

The governments do not have any projects that could mitigate the issue. Even the K-IV project, that could supply an additional 260MGD, may take a further two years to complete. The project began in 2007 but has been delayed as the Sindh government changed its designs about 21 times. According to sources, it could take four years to complete.

Furthermore, with no check in place, local valve men of Karachi Water and Sewerage Board (KWSB) have become a powerful mafia and distribute water unfairly. Due to this, some areas suffer acute water scarcity and some other localities are even deprived of a single drop of water. The crisis could endanger the law and order situation in the city.

The KWSB official Asadullah Khan informed The Express Tribune, Karachi has a population of 1.17m but gets a supply of only
350MGD. He added that since Hub Dam had dried up, we face further 1m gallons of shortage in water. “Dhabeji Pumping Station is currently the only water lifeline of Karachi,” he said.

Conservation only way to ward off water crisis

Khan said that 20 pumps of Dhabeji Pumping station were supplying water to the city and appealed to the residents of Karachi to use water with extreme caution.

He also said that steps were being taken to stop water theft and asked residents to report if they observed any illegal water hydrant anywhere.

Khan said Million Gallons Per Day programme at Dhabeji Pumping Station was underway. “We will try to eliminate water crisis as soon as possible.

That’s the reason the system of supplying water on alternate days has been introduced,” he said.