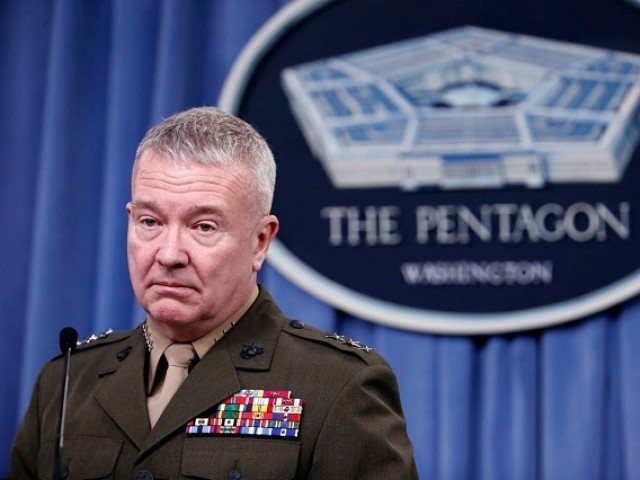 Lieutenant general Kenneth McKenzie, the incoming chief of US Central Command, said he would make Pakistan a priority engagement after he takes command of the strategic command theatre.

In a written response to a set of advance policy questions, the Marine Corps general termed the military to military relationship between the two countries strong and important strategically, given “that Pakistan is a nuclear power that sits at the nexus of Russian, Chinese, Indian and American geopolitical interests”.

McKenzie said previous frustration between Washington and Islamabad has centered around instability in Afghanistan.

On Monday, US President Donald Trump wrote a letter to Prime Minister Imran Khan seeking Islamabad’s help in facilitating a negotiated settlement of the lingering conflict in Afghanistan.

The US Special Representative for Afghanistan Reconciliation at the Department of State Zalmay Khalilzad made a trip to Pakistan this week to reiterate President Trump’s desire to seek the country’s cooperation for peace and stability in Afghanistan. In a meeting with Khalilzad, Imran said he personally wished for regional peace and that Trump’s letter urging Pakistan to back the peace process was welcomed.

McKenzie said, “stability in the South Asia region remains the most important mutual strategic interest for both the US and Pakistan, and I think we must continue to engage with Pakistani leadership to realise how we can achieve this mutual interest”.

When asked what he considers the major challenge to the bilateral strategic relationship, the senior US military official said Pakistan must influence Taliban leadership to come to the negotiation table and acknowledged that this was not a major policy focus for Pakistan but a stable Afghanistan was.

He said, upon confirmation, Centcom would continue to support the Trump’s South Asia strategy.

Reacting to Pentagon’s decision to withhold $50 million of the Coalition Support Fund (CSF) in July, Ambassador Aizaz Chaudhry emphasised that the funds in questions were a reimbursement of the expenses incurred by Pakistan towards achieving “our common objectives in the fight against terrorism” and were not assistance.

McKenzie confirmed this and said significant security assistance provided by the United States since 2001 included “funds to reimburse Pakistan for the costs associated with military operations conducted by Pakistan along the Afghanistan-Pakistan border”.

Reiterating on Washington’s stance, the Marine general also claimed Pakistan was using the Afghan Taliban as a hedge against Indian influence in Afghanistan and that if confirmed, he would support Khalilzad’s efforts.

‘Worst drought I have seen’: Afghan farmers forced to flee