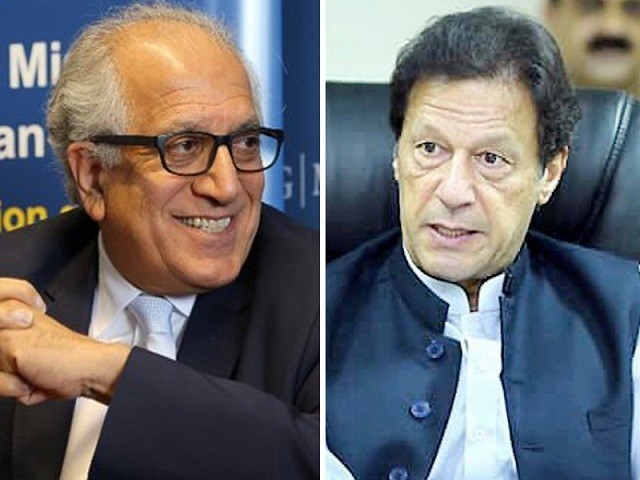 ISLAMABAD: US diplomat and the Special Representative for Afghanistan Reconciliation at the Department of State Zalmay Khalilzad reiterated on Wednesday US President Donald Trump’s message of seeking Pakistan’s support for a peaceful resolution to the Afghan conflict.

Prime Minister Imran Khan on Wednesday met US diplomat and Special Representative for Afghanistan Reconciliation at the Department of State Zalmay Khalilzad in Islamabad where the latter relayed Trump’s message and said America wants Pakistan’s support in seeking for a peaceful and political resolution to the Afghan conflict.

PM Imran reiterated that Pakistan has also always wanted this and that reconciliation is the only solution towards peace. Imran said he personally wished for regional peace and that Trump’s letter urging Pakistan to back peace was welcomed.

He underscored the importance of dialogue on both sides and also spoke of cooperation in the fields of trade, investment, education and health.

Qureshi had assured all-out support to the US for a negotiated settlement of the Afghan conflict in a meeting with Khalilzad on Tuesday.

Washington’s special envoy, tasked with finding a negotiated end to Afghanistan’s bloody 17-year-old war, will hold talks with Pakistani officials at the Foreign Office on the regional situation and Afghan reconciliation process.

Since his appointment in September, US envoy Zalmay Khalilzad has accelerated efforts to find an Afghan peace pact that would allow for the eventual withdrawal of the United States from its longest war, which has already cost Washington nearly $1 trillion.

Khalilzad will also travel to Afghanistan, Russia, Uzbekistan, Turkmenistan, Belgium, the United Arab Emirates and Qatar in stepped-up efforts to find a peaceful end to the war.