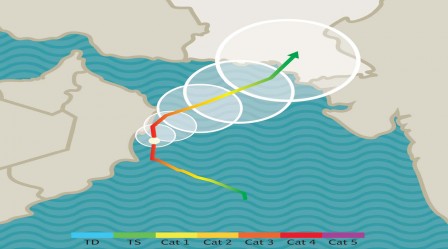 Thousands being evacuated from remote villages along Pakistan’s coast

Though the intensity of the weather system has subsided, the authorities in Pakistan are scrambling to prepare for the arrival of Cyclone Phet, evacuating around tens of thousands of people residing along Pakistan’s coastline as of Thursday.

Cyclone Phet is currently heading towards Oman, and will graze the Gulf state’s shoreline on Friday as a Category-3 storm – down from the initial estimates of it being a Category-5 Super Cyclone. It will then turn its course towards Pakistan.

“Cyclone Phet has almost reached the Oman coast and could recurve towards Pakistan’s coastline of Balochistan and Sindh in the next 24-36 hours,” Naeem Shah, a meteorological department official, told AFP.

Though there are still chances of the storm gaining intensity, current estimates have it that the weather system will subside substantially from its current status and come down to a tropical storm by the time it strikes the south of Balochistan and Sindh. Quoting the 6th cyclone warning of Met Department issued on Thursday, APP reported that after remaining stationary at the Oman coastal area for about 24 hours, the cyclone may start curving towards Pakistan and lose some of its intensity. It will turn into a moderate intensity tropical cyclone with maximum sustained wind of about 70 to 90 kilometres per hour with an associated storm surge of 3 to 5 meters. Under the influence of this cyclone, widespread showers with isolated heavy to very heavy downpours, accompanied by strong winds, are likely in Sindh and Balochistan’s coast between Saturday and Tuesday.

It was initially estimated that the weather system would hit Pakistan between Friday and Saturday, but with the downgrading of its intensity, it is now expected on Sunday.

Hospitals have been put on alert, medicine and equipment stockpiled, while tinned rations and clothes are being arranged, authorities said.

Forecasters warned the cyclone could uproot power and communication lines along Pakistan’s coast but believed there would be less impact on Karachi.

Regarding the 60,000 evacuees, Munir Memon, an official in the provincial relief commission, told AFP that they had been shifted to relief camps established in school buildings in the area. According to AFP, the evacuees belonged to the most vulnerable areas along the coast, where hundreds of villages are without proper communication and transport networks. In case of a flood, these areas would be the most difficult for authorities to access in case of rescue operations.

“We have a better infrastructure and improved health facilities in Karachi which makes the city much safer from such catastrophes,” Memon said.

Pakistan’s meteorological department has predicted heavy rainfall and strong winds along the coast over the next three days.

Pakistan’s Maritime Security Agency said it had ordered all boats to remain in the harbours.

In Baluchistan, the head of the province’s disaster management authority, said 500,000 people in coastal towns are under threat from the cyclone.”The authority has taken all precautionary measures to deal with the situation and to evacuate people to areas at least 10 kilometres (six miles) away from the sea,” said Mohammad Hassan Baloch.

According to Ashgar Shah, Coordinator International Union for Conservation of Nature (IUCN) Gwadar, present data suggested that tropical cyclone Phet might not directly smash into coastline of Gwadar, Jeewani and other coastal regions of Makran Division, adding however, Gwadar and other nearby coastal areas were still in the range of the cyclone. In an interview with APP on Thursday, he said IUCN Gwadar is collecting data after every two hours about current position of tropical cyclone Phet, which is being provided to the district government Gwadar and other stakeholders.

A few years back, during the last tropical cyclone, torrential rains lashed major parts of central and southern Balochistan for days, causing destructive floods. As a result, hundreds of people lost their lives and tens of thousands were displaced.

According to Balochistan’s Met department, as it stands the storm’s intensity would be felt more in areas of Sindh, including Badin, Thatta and Karachi, than in Balochistan.

On its part, Pakistan Railways, Karachi Division, has taken precautionary measures too.  Divisional Superintendent (DS) Aftab Ahmed Memon, told APP that an emergency cell has been established in the railway’s control office. He said that relief teams have been constituted and provided with material to ensure that railway operations continue smoothy.

According to PPI, the Pakistan Navy has launched “Operation Madad”, under the instructions of Chief of the Naval Staff Admiral Noman Bashir, placing all its assets and resources on high alert to provide all necessary assistance. Air sorties are planned to provide search and rescue. Ships and crafts have been put on high alert to meet any eventuality at sea.

Besides this, medical teams along with requisite medical facilities have been stationed at different locations along the coast.