The missio­n was its 16th missio­n for NASA as part of a long-term contra­ct to ferry suppli­es to space
By AFP
Published: December 6, 2018
Tweet Email 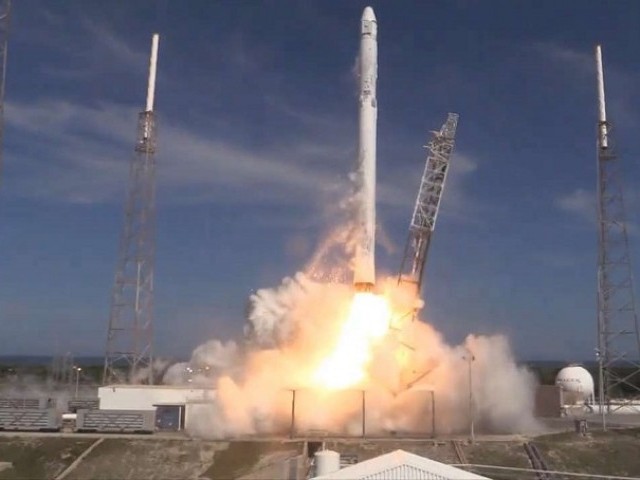 TAMPA: SpaceX on Wednesday blasted off its unmanned Dragon cargo ship, loaded with supplies, science experiments and food for the astronauts living at the International Space Station but failed to successfully land its booster afterward.

“We have had a great liftoff,” said SpaceX commentator John Insprucker, as the Falcon 9 rocket soared into the sunny, blue sky over Cape Canaveral, Florida at 1:16 pm [1816 GMT], carrying 5,600 pounds [2,500 kilograms] of gear.

The mission was SpaceX’s 16th mission for NASA as part of a long-term contract to ferry supplies to space.

The Dragon cargo ship successfully made it to orbit, which was the primary goal of the launch.

But the tall portion of the rocket missed its goal of securing an upright landing on the solid ground at Cape Canaveral’s Landing Zone 1.

After separating from the second stage, and firing its engines to return to Earth, a video camera on board showed the first stage spinning.

“Appears to be undamaged and is transmitting data. Recovery ship dispatched.”

Later, Musk posted the full video from on board the booster, showing the rocket spiral, then stabilize, then crash sideways into the water.

It was the first time SpaceX ever failed to land a booster on solid ground, following a string of 12 straight successes.

Ocean platform landings have proven a bit trickier, but SpaceX has managed to stick the landing, whether on land or sea, 32 times in all.

The effort is aimed at reducing the cost of launches by re-using expensive components, instead of jettisoning them in the ocean after each mission.

The rocket was initially meant to take off Tuesday but was delayed for a day after engineers discovered moldy mouse food in one of the science investigations designed to study the effect of microgravity on the immune system.

The bad food was replaced ahead of Wednesday’s launch.

Other experiments among the more than 250 on board include a new kind of mustard green lettuce that astronauts will grow in space.

The Dragon space capsule that flew on Wednesday was used once before, on a supply mission in February 2017.

It should arrive at the space station on Saturday.