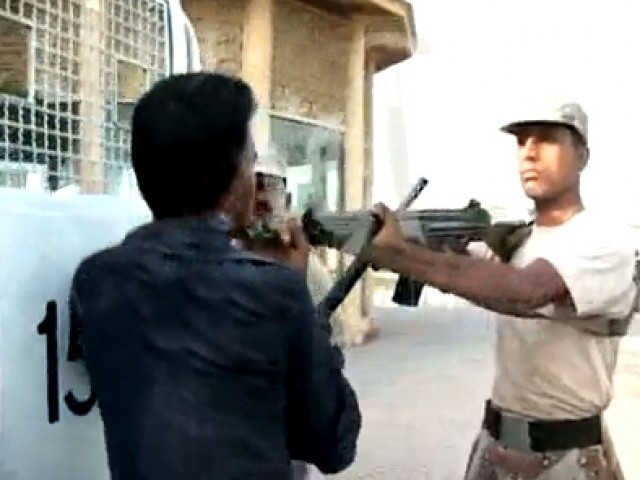 The killing of Sarfaraz Shah, 19, caused uproar in the corridors of power on Thursday.

The chief justice of Pakistan has taken suo motu notice of the incident and summoned DG Rangers, the IG and chief secretary of Sindh.

There is hope that finally justice will be served over the extra-judicial killing in broad daylight which earlier was to be an open and shut case had a cameraman in the vicinity not shot footage of the incident.

In a blatant show of force and brutality, the footage showed how an unarmed man, suspected of stealing a mobile phone at gunpoint, was shot by Rangers’ personnel inside a public park in full view of passers-by.

Doctors say Shah, who was fatally wounded by Rangers personnel on Wednesday afternoon in Boat Basin’s Shaheed Benazir Bhutto Park, could have been saved had he been brought to the hospital earlier.

A senior doctor at Jinnah hospital, where the victim was brought, said Shah was  still breathing when he was brought in, but collapsed within minutes.

“We tried our best to revive the patient, but it was too late. He had bled profusely and there was nothing much we could do,” he said.

Another doctor at the emergency ward said the victim had suffered three wounds caused by two bullets. One of the bullets pierced the ‘semoral vein’, one of the main arteries above the thigh area, the doctor said.

“Such injuries are always critical and the only chance to save someone in this condition is to bring them to the hospital immediately,” she said, adding there was also bullet hole on the victim’s forearm.

The footage of the incident shows that Sarfaraz was left to bleed on the pavement of the park while Rangers personnel made no effort to rush him to the hospital after shooting him.

Prime Minister Yousaf Raza Gilani and President Asif Ali Zardari have ordered an inquiry and offered their condolences to the family of the victim.

Malik, in his comments to the media after the meeting, said an inquiry had been ordered into the incident.

“He is a criminal, we cannot forget that. But no law enforcement authority had the right to kill a suspect,” he added.

Special Assistant to Chief Minister Sindh Waqar Mehdi said the meeting decided not to curtail the overreaching powers of Rangers in the city as “such an order would not have set a good precedence.”

The government has zero tolerance for extra judicial murders though, he added as an afterthought.

Mehdi said the meeting decided to set up a joint interrogation team (JIT) comprising senior officials from the Inter-Services Intelligence and Military Intelligence to probe the incident.

Meanwhile, DG Rangers addressed a late night press conference on Thursday and said that six Rangers personnel involved in the incident had been taken into custody and a board of inquiry headed by a brigadier and including two lieutenant-colonels had been set up to look into the incident.

Despite the footage clearly showing Rangers personnel shooting the unarmed Sarfaraz at point blank range, Chaudhry said that “appropriate action would be taken against the personnel when charges are proved.”

Interestingly, of the three first information reports (FIR) lodged into the incident, two were against the victim Sarfaraz.

According to police sources, Rangers personnel had immediately rushed to Boat Basin police station on Wednesday to lodge an FIR before any one from the victim’s family could do so.

Police had asked Rangers to bring a private complainant first, which they readily did by lodging the cases on behalf of an individual, Afsar Khan. The first case 225/11 was lodged against Sarfaraz with Sections 393 (attempt to commit robbery), 353 (assault on public servant) and 324 (attempt to murder).

The second case 226/11 with section 13-D dealt with an illegal weapon allegedly recovered from Sarfaraz.

Sarfaraz’s brother Saliq Shah told The Express Tribune that police was reluctant to lodge an FIR into the incident and only did so after their sit-in in front of the CM House late Wednesday night.

SHO Boat Basin Inspector Naseer Tanoli Khan was suspended because of the complaint made by the victim’s family.

Saliq lodged a case, 227/11, against six Rangers personnel, including Mohammad Afzal Khan and Shahid Zafar and charged them with section 302/34 of murder.

Rangers’ sources say the six personnel belonged to 32 Wing of the paramilitary force which is deployed in Boat Basin area presently.

SP Tariq Dharejo said that after video footage had been submitted to the police as evidence against Rangers personnel, the two FIRs lodged against Sarfaraz had been quashed.

But Waqar Mehdi said he was not aware how the two FIRs could have been quashed when it was decided at the meeting that charges against Sarfaraz being a suspected robber would be first investigated by the JIT.

Dharejo said police will only act against the personnel after the Rangers’ board of inquiry hands over the investigation to them.

The footage of the extra judicial killing was made by a cameraman of a Sindhi television channel Awaaz, who was incidentally at the park recording a TV show.

The cameraman, Abdul Salaam Soomro, is reportedly facing death threats and is in hiding.

The matter was also brought to the notice of Sindh Minister for Information Sharjeel Memon at the Sindh Assembly where journalists held a protest over threats given to their colleague.

Memon assured that all steps would be taken to protect the cameraman involved.

Safaraz was buried at a graveyard in Paposh Nagar town where hundreds of people attended his funeral. His brother Saliq said that after the prayers, some people also protested against the Rangers in front of their headquarters near Ziauddin hospital.

He said that during and after the funeral, senior Rangers officials called him and assured him that justice would be served.

“But what justice can they give us? My teenage brother who had just given his matriculation exams was brutally murdered in broad daylight. Can they bring him back?”