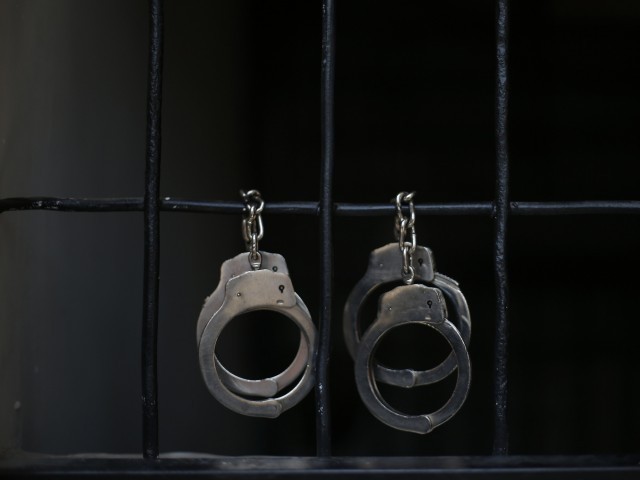 Four robbers were nabbed after a brief encounter with police in Hafizabad on Wednesday.

Saddar Area DSP Khalid Maqbool told Express News that he and his team were patrolling the area when they received information that four robbers riding two motorcycles were looting citizens near Channi Hanjrawan Village. He added on the tip-off, they rushed to the spot and challenged the outlaws.

He maintained that on seeing the police team, the accused opened fire on them and tried to escape. He pointed out the police retaliated and an encounter occurred. The DSP mentioned that as the suspects were equipped with automatic weapons, more police contingents were called in for help.

Maqbool said when the robbers reached Alipur Road in Model Bazaar, the police personnel apprehended them.

He revealed that the police seized illegal weapons and looted valuables from the possession of the accused. The police official highlighted that all the culprits belonged to Kolu Tarar area in Hafizabad and were involved in several criminal activities.

He said that the robbers were shifted to the police station for interrogation, while a case had been registered against them.

Earlier, at least two robbers were nabbed by police, while their accomplices managed to escape after putting up a brief resistance in Faisalabad.

The police said Sajid Abbas, Hafiz Junaid and Waseem Abbas were on their way to Khurram Chowk from Tezab Mill Chowk. That was when four robbers, riding two motorcycles, intercepted them.

The culprits looted cash, mobile phones and other valuables at gunpoint from the victims and tried to flee. In the meantime, the victims saw a police mobile which was on routine patrol and shouted for help. The police team responded immediately and apprehended two robbers after a brief resistance. However, two accomplices of the accused managed to escape by taking advantage of the darkness.

The arrested outlaws were identified as Asad and Tauseef. The police also seized Rs10,000, cellphones and a pistol from the possession of the culprits.